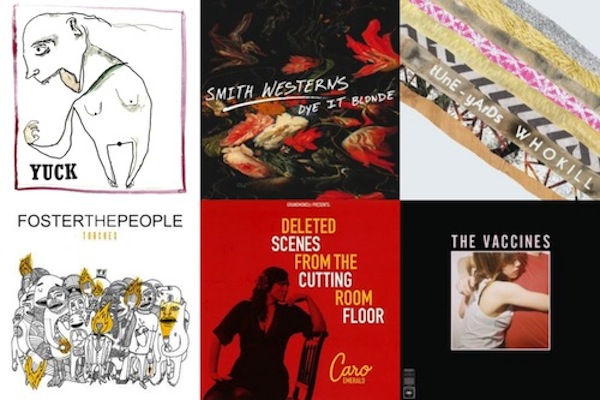 Let’s face it, 2010 wasn’t the greatest year for indie bands. Besides Broken Bells, not many emerged, and it was mostly about semi-established bands being rediscovered by the masses. This held true for Florence & The Machine, whose album actually debuted in mid-2009. Also Mumford & Sons, Metric, Arcade Fire, MGMT, Phoenix and Bon Iver, all very known in the indie community previous to 2010, were the talk of award shows, and varying esteemed music lists of last year.

2011 is another story, not only are there the usual hoards of bands trying to make it, some of them have a LOT of potential for the same sort of indie sellout glory that Mumford & Sons achieved. I can only hope that “Little Lion Man” will be replaced by the Sonic-Youth influenced sounds of Yuck, or the experimental wailings tUnE-yArDs or the retro jazz clap ‘n snap of Caro Emerald, whose early 2010 debut has yet to even be released officially in the U.S.

Most of these contenders formed fairly recently and released CDs this year, with the exception of Emerald’s Deleted Scenes From The Cutting Floor.

6. Smith Westerns. How Smith Westerns manage to sound like both The Jam and Lynyrd Skynyrd, well let’s say Blitzen Trapper is beyond me. This Chicago trio epitomize lo-fi, which makes it all the more confusing. “Still New” has the exact partial guitar rift of LS’s “Free Bird,” while “All Die Young” would be under shoegazer music in the hypothetical sub-genre dictionary. It is by no means boring, since shoegazer certainly implies such things, no, their latest Dye It Blonde is all but yawn-worthy. Though if you are looking for fast-paced Ramones hyper mania I’d turn to The Vaccines. The first single for Smith Westerns, “Weekend,” is so fun you hardly notice it only has about nine different lines of lyrics to it.

5. Caro Emerald. I know it’s a stretch to call a Dutch jazz/pop singer “indie,” but the only available copies of this CD are still labelled “import.” It’s Something I cannot fathom, though it gives her that underground indie feeling. This woman feels like Amsterdam’s answer to the musical loss that is Amy Winehouse. “The Lipstick On His Collar” from her freshmen effort, which went platinum five times in her homeland and gold in the UK, is an iTunes must-have. “Just One Dance,” “Back It Up” and “You Don’t Love Me” are also highlights of her Deleted Scenes From The Cutting Room Floor album. Thirty year old Caroline Esmeralda van der Leeuw (it’s fun to say) is versatile too, a quite memorable, horn-laden ska-influenced version of Gaga’s “Bad Romance” covered by Ms. Esmerelda surfaced last year on Youtube, and it’s right up there with Lucas Silveira’s version.

4. Yuck. The second of three foreign bands on this list, Yuck, hail from England. Yes, our British cousins with their insanely small country are producing more amazing music per year than an entire half (or more) of the U.S. Yuck features two former members of the versatile indie band Cajun Dance Party and Like Smith Westerns, Yuck draws inspiration from Thurston Moore and Sonic Youth. It’s hard not to sound a bit like Sonic Youth, a band with 16 records under their belts that all vary in 90’s style. And Yuck feels very much like the 90’s, too cool to even name their album. “Get Away” brings you right back to your beer-stained college dorm sofa, sitting on your bunion doing homework with your Dinosaur Jr. or Melvins record playing. All of Yuck’s first self-titled CD, smells very much like hemp. “Shook Down” and “Operation” are so Breeders or Pixies-flavored it hurts, so good.

3. tUnE-yArDs. Merrill Garbus, the voice behind tUnE-yArDs brings us a combination of sounds we’ve never actually heard before. Whatever you want to call this genre, blues, rock, jazz, indie, it’s not something you want to miss or something you’d even want to attempt to label. The Connecticut-native moved out to Oakland and began working with jazz musician Nate Brenner, thus explaining the drastic sound change in her second album, w h o k i l l, from her first more lo-fi effort, Bird-Brain. Her androgynous voice has the pitch-variance of both a chickadee and an owl, which she shows off proudly on her single “Bizness,” not to mention the beautifully layered blues mapping of “Powa,” or the afro-beat influenced “Gangsta.”

2. The Vaccines. This London four-pieced have already ventured into a territory rarely crossed by indie bands, they are currently selling out shows around America on their tour opening for veterans Arctic Monkeys and they’ve cracked the top five on UK album charts with What Did You Expect From The Vaccines? However, The Vaccines have yet to explode in America in the way that Foster The People have. They grind their punk-influenced teeth hardest on songs like “Norgaard,” singer Justin Young seeps nonchalant charm, the type that hipsters eat up like New York Chedder Kettle Chips. “Post Break-Up Sex” and “Wreckin’ Bar (Ra Ra Ra)” are also highlights.

1. Foster The People. What can I say about Foster The People’s Torches that hasn’t already been said? They are this year’s MGMT. I could call them less innovative, but collectively MGMT has disappointed me with their nasty overwhelming sophomore album Congratulations. Foster The People are on my good side so far. “Pumped Up Kicks” is their “Time To Pretend,” “Helena Beat” is their tension-building “Kids.” “Don’t Stop (Color On The Walls)” is the best/loudest simplistic whistle-worthy gem on Torches, with it’s country-twang and record-scratch effects. The hit song “Pumped Up Kicks,” appearing on alternative radio stations across the country for many months now, even earned the band a VMA nomination for Best New Artist. I salute you, Mark Foster, and your “people.” Hope you win. “All the little kids with their pumped-up kicks” they’re on your side, FTP, or Bieber’s. Blast those child shoe fanatics.

…That concludes my indie bands to watch in 2011 list, honorably mentions go to Girls, Cut Off Your Hands and Liam Finn. Also, Arctic Monkeys have made an amazing fourth album, it’s called Suck It And See, just saying, if they were a newer band they’d be on here. Check out “All My Own Stunts” and “Piledriver Waltz.” Alex Turner could teach these bands a thing or two about longevity. Just please god let them avoid the advice of Brandon Flowers, who let’s face it, only made one and a half good albums in his entire whiny self-satisfying career. And yes, it’s over for him.