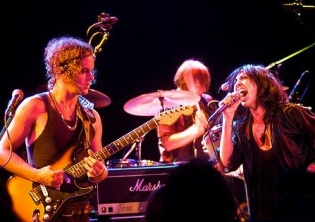 When you see Nico Vega in concert you forget that they’re not the biggest band in the world. You forget that you’re encompassed in a crowd of under two hundred people.

You feel that you are hearing Led Zeppelin’s guitar and Nirvana’s drums, while witnessing Janis Joplin’s stage presence.

After seeing almost all my favorite bands/artists in concert, the big names, and small – everyone from The Foo Fighters to The Killers to Lady Gaga to Sonic Youth, I’ve come to the conclusion that Nico Vega is the best in concert.

This tiny band, devoid of bass, is a California-based three piece full of oddities. A curly-haired white boy with a v-neck t-shirt, an aesthetic average joe, and an indescribably charismatic woman with bulging eyes and more hand gestures than a traditional Italian housewife. 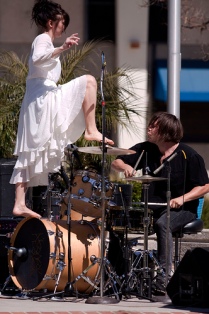 It becomes piercingly unclear the moment that Nico Vega hit the stage that you’re not watching a supergroup. Seething with talent and barely discovered, the band – singer Aja Volkman, guitarist Rich Koehler and drummer Dan Epand – formed in 2005 in LA (Volkman is native to Eugene, Oregon).

I first saw them as the opening opening band for Metric. They seem to transform each time I watch them. First I didn’t know what to think of Aja Volkman. I thought maybe she was an extremely energetic 40 year-old, but she is less human, more entity (like Lykke Li) and her age hardly matters. Yesterday at the concert I attended she donned partially formed dreadlocks with a quarter of her head shaved.

The music is undefinable, hard rock, indie, soul, a pinch of hip-hop maybe? There’s this woman, Aja, rocking back and forth, in a roomy dress, sleeves longer and more open than you’d imagine the witches in Macbeth having. You don’t know if lightning is going shoot out of her eyes while her vocal range is distractingly commanding you. 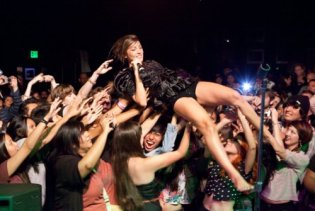 Luckily for us her intentions are not evil, or else she could easily point into the audience and communicate a telepathic list of wrongdoings for your future. Instead, the lyrics are positive, surprisingly so. It’s hard to rock this much and convey such a constructive message, but Nico Vega manages it effortlessly.

Yesterday night was the second time I’ve seen them play the Doug Fir, a small Portland venue. And by small venue, I mean bar. The sound is shaky there, since it’s basically a basement. Yet somehow, on a Tuesday night, the band drew in their most loving and responsive fans. And at $12 dollars how could anyone resist? It’s only slightly pricier than a movie ticket and a billion times more memorable.

I looked around the crowd at the 120 people or so gathered around the bar and stage and momentarily wept for all the indie bands out there that don’t get the public and media attention they truly deserve. Nico Vega possesses an entertainment quality that can’t be learned in a 101 format, Aja especially, the ringleader so-to-speak. Then I saw everyone screaming, those 120 people as enthusiastic as a stadium full of U2 fans, and I forgot.

There’s an intermission where Rich and Dan play an instrumental duet, a raucous drum-meets-guitar romance, the high point. He claws at his instrument as if it were an undesired conjoined twin. Rich Koehler would easily be considered one of the best guitarists of the decade, if only more people knew his name.

“Over time you can kill me, But I’ll resurrect so…NANANANANANA. You’re never gonna thrill me…” (“Gravity”)

In the meantime, Dan Epand is beating the mid and high tom in the same abrasive manner (is it worth mentioning that actor Michael Peña was the original drummer?). This is not the tightly-wound style of most indie bands, the beat is more formulaic noise than polite and precise tappings. It’s raw and passionate and hungry, not like a pent-up zoo lion, like a fucking shark, boar, hippo, wolf, tiger, piranha. Whatever.

During “Beast” their five-minute political/operatic rage-release, the band is at the height of chemistry. It’s beautiful, but you feel an apprehension about getting too close…

Aja is a little scary that way, you find yourself looking over your shoulder, wondering, “Did she just point at me? Is she looking at me? What are her intentions?” (I believe them to be, trancelike, and operating on ferocious charm)

Comparisons have been made to Karen O or the The White Stripes for their lack of bassist. None of this applies in sound. It’s perhaps art-rock with an emphasis on rock. It is much heavier than anything from Yeah Yeah Yeahs and Volkman sounds much more like Nina Diaz of Girl In A Coma than Karen O. Plus I don’t want to be rude, but Aja has more vocal range. In fact she has more vocal range than the leader of any female-fronted rock band I’ve seen.

Whether she’s momentarily beating a tenor drum while pacing and stalking the stage like a eager, hyperactive rattlesnake, or manically shaking to a song’s climatic tipping point so fast that you start to wonder if it’s some sort of strobe 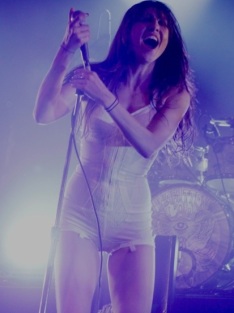 light illusion (it’s not) she is absolutely mesmerizing. She interacts on the most loving, down-to-earth level with the fans, her constant grin between songs beaming with appreciation.

I wish all the frontmen and frontwomen of the world could take lessons from her, if only this caliber of art could be taught.

“Who’s afraid to dance with a witch like me, and her wicked trance?” (“A Million Years”)

If you have the chance to see Nico Vega, please do. You will not be let down…

Also, check out their videos for “So So Fresh” and  “Be Giving” and their full-length self-titled album.