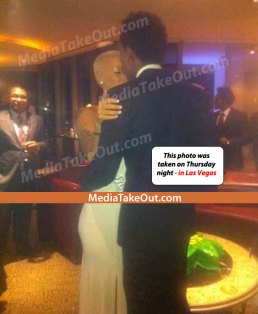 It doesn’t come as a surprise that the skinny-bones rapper Wiz Khalifa would marry that bald girlfriend of his, Amber Rose. The two were discussing marriage just a few weeks ago at the VMA pre-show.

MediaTakeOut is reporting that the two were wed Thursday, September 8th in Las Vegas, but others are saying that the “photographic evidence” is really just of them celebrating Wiz’s birthday.

I guess since Kanye never married her, she took the so-not-next best thing. And who is Amber Rose? I see her all the time and still don’t know. A model/alien with a diamond-encrusted vagina?

Even IF this isn’t a picture of their wedding, they’re still going to get married within months. So, meh. Who cares.