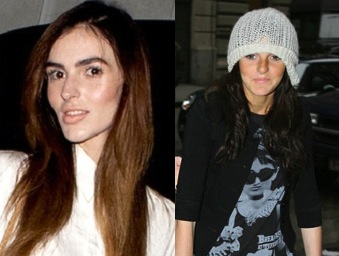 Everyone’s been talking about Lindsay Lohan‘s 17 year-old sister’s new look. Ali Lohan’s modeling portfolio has opened our eyes to the fears of “growing up.”

Or is it plastic surgery? Or maybe she just started eating more scarcely than Cinderella, and intentionally stopped plucking her eyebrows.

She looks like some sort of terrifying 95-pound waif-mannequin. Someone help her!

And whatever you do, don’t book her for any work! Nobody encourage this possibly UFO-abductee!…

Two unreliable sources have expressed concern for Ali, including her father who said, “Ali was always on the thin side but seeing how much weight she’s lost there appears to be a drastic change that concerns me.”

And reality-star/plastic surgeon  Dr. Gary Alter (Doctor 90210) who told RadarOnline, “It’s obvious to me that her eyebrows are higher than they were before…There doesn’t appear to be much movement on her forehead, and she looks like she has had Botox.”

Her rep, Steve Honig insists that Ali has had no plastic surgery saying humorous things like,

“Aliana has never had any type of plastic surgery in her life, nor has she ever considered it.”

“Her success as a model lies with her natural looks and she has no interest in changing that…During the past two years, she has gone through a normal teenage growth spurt that has made her taller and slimmer.

[Uhhh, no one said anything about her growth, dude. Her goddamn face looks like a Nazi science experiment]