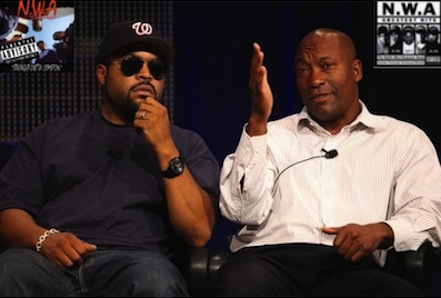 The in-your-face gangster rap group were behind a movement that shook the core of the music industry, something that needed to happen, with “Fuck Tha Police” and “Straight Outta Compton.”

Ice Cube is attached as a producer, not an actor, and Singleton wouldn’t let out many details though he did say:

“I can’t talk about it too prematurely about the stuff I’m doing because nothing’s come to fruition yet, but Cube and I are talking about doing the NWA Story. The script is really, really good, and so we’re just figuring it out. New Line really want to make it.”

It’d be nice to see the recently-reformed “family man” Ice Cube working with John Singleton again, as he did on Boyz N The Hood. Hopefully John doesn’t butcher it, like 2 Fast 2 Furious.

The group were an all-star team, with Dr. Dre, Eazy-E, Ice Cube, MC Ren, Arabian Prince and DJ Yella, so I imagine a film would have to get a phenomenal cast. (I REALLY hope that people like T.I. and Chris Brown get left the fuck out of this one)

So what about the bitch who got shot? Fuck her!
You think I give a damn about a bitch? I ain’t a sucker!
This is the autobiography of the E, and if you ever fuck with me
You’ll get taken by a stupid dope brotha who will smother
word to the motherfucker, straight outta Compton.