Edward Furlong, who was the second and possibly most memorable actor to play John Connor in the Terminator film series, owes over $15,000 in child support payments to his ex-wife Rachael Bella Kneeland.

This is one of many of Furlong’s public/shameful issues. Kneeland complained back in January that Furlong was a month behind on his payments to her, and asked for an increase in both spousal and child support.

She also attempted to “terminate” phone contact between their son, Ethan, and Edward, after he called her a “dragon” on the phone to Ethan, and mentioned that her new boyfriend was a wimp who “has a vagina…”

The American History X/Terminator 2: Judgment Day star has been arrested three times – once in 2001 for driving without a license plus DUI charges, and again in 2004 for public intoxication. Then once more in January of this year, for violating his probation. 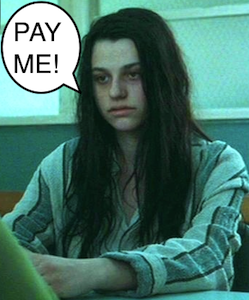 He is also a notorious and self-admitted heroin and cocaine addict, who married the girl who played “Becca” in The Ring! (Yes Rachael Bella was the girl in the intro to the The Ring, so traumatized by that Asian TV-dwelling ghost that she was put in a mental institution!)

[She also had a substantial role in The Crucible. Oh my god, she’s a mental patient AND a witch?! Better pay up, Furlong…Bet he wishes he could go back in time with Arnold, to make better real-life decisions]