Steubenville and surrounding areas in Ohio, are the locations of very unusual crimes. A rogue group called the “Bergholz Clan” are terrorizing Amish men and women, breaking into their houses and cutting their hair and beards.

The clan actually consists of two Amish sets of brothers, the Mullet (Sam, Johnny and Lester) and Millers (Levi and Lester), most of which have already been arrested for assault and burglary…

The group have broken into the homes of several families, spanning across four counties on the Eastern side of Ohio state – Carroll, Holmes, Trumbull and Jefferson counties.

The attacks are said to be religion-based, as cutting an Amish man’s beard or a women’s hair is meant to humiliate them. The suspected ringleader of the operation, Sam Mullet, is head of a sect of 18 families who stray from the mainstream Amish community. 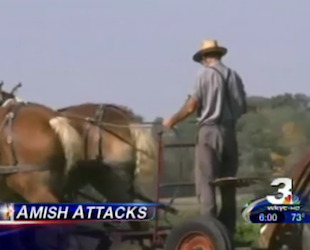 Mullet, who some mainstream family members call a ‘cult leader,’ says the police need to ‘stay out of their business’ and that none of this has to do with the judicial system:

“It’s all religion, that’s why we can’t understand why the sheriff has his nose in our business. It started with us excommunicating members that weren’t listening or obeying our laws…I didn’t know the courts could stick their nose in religion, but that seems what they did here.”

He also brought up rumors that he insists are false, involving him punching his grandchildren, and forcing his daughters to get abortions, plus killing and burying unhealthy children in the yard.

“They said I was being bad to my daughters, forcing them to have abortions and stuff. That we had children who weren’t healthy and I was killing them and burying them. But there’s no evidence of that.”