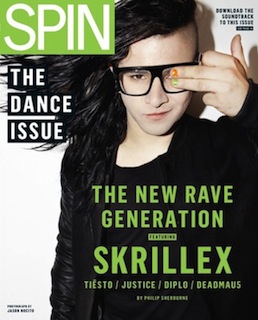 I love Shirley Manson (of Garbage fame) so when she posted a video on her Facebook and called it “video of the year” with a bunch of exclamation points, I was inclined to check it out.

I realized it was by this Skrillex dude that Spin put on their “Dance Issue” cover. He’s bald but simultaneously has long hair, making him the hairiest bald man since Michael Bolton and crazy Bryan Cranston on Breaking Bad.

I know the name “dubstep” is putting people off, but It’s really just bizarre/random/cinematic electronic music. Some of it is awful and some of it is good. Same goes for pop, rap and rock…

The Skrillex video is fine even though it’s almost as weird as “Hurricane” by 30 Seconds To Mars, but it kind of gives me epilepsy and heart palpitations (dolls scare me), so I prefer this…[Skrillex’s “First Of The Year (Equinox)” directed by Tony Truand. “Wildfire” by SBTRKT” featuring Yukimi Nagano of Little Dragon directed by Sam Pilling]

2 thoughts on “So This Is That Dubstep Stuff People Keep Talking About?”