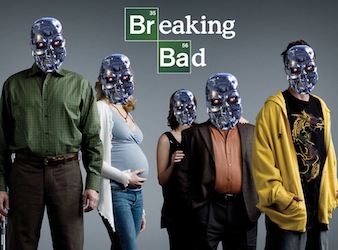 Okay, obviously the thing I’m about to spoil isn’t the fact that there are robots on Breaking Bad, it’s a show about a high school teacher who starts cooking meth, not some Star Wars fantasy.

The season 4 finale of AMC’s hit show had a very surprising ending, our protagonist Walter White finally sees his mortal enemy Gus Fring get what he deserves, though the scene left me visually shocked and perturbed…

Like it says in the headline, this does contain SPOILERS so don’t blame me if you missed the episode because you’re either too busy or too poor.

This treacherous villain, who we were introduced to in season two (2009) as Walt’s new “business partner,” dies in a very unrealistic and horrific manner.

On a show where I’m fairly used to a side of realism with my high-budget special effects, it was a surprise to see Gus’s head turn into T-1000 from Terminator 2.

He gets blown to smithereens by the badass old mute bell-ringing dude in the wheelchair.

Half his body is mutilated yet his shiny skeleton still walks out the door, straightens his tie and THEN falls to the floor in a heaping pile of death.

[Tell me that isn’t ethnic Robert Patrick in T2: Judgment Day?? It totally is!]

2 thoughts on “There Are Cyborgs On ‘Breaking Bad’ Now (Spoilers)”