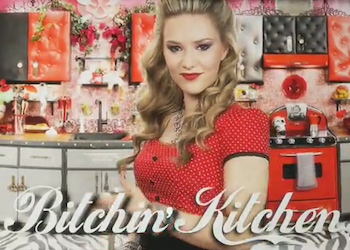 31 year-old Nadia Giosia, playfully nicknamed “Nadia G,” made her American debut on the Food Network, November 2nd. She is being called the “Julia Child of the net generation” for her charismatically spunky and loud persona.

When you first see the promo for the second season of Nadia G’s Bitchin’ Kitchen you wonder if MADtv is making a comeback, or if SNL has begun advertising on other channels.

You’d be wrong, because this is a real show, featuring a real host. A tattoo-obsessed, midriff-showing 90’s flashback, who, in her own right, is sort of a genius marketer.

She began her cooking career on the internet, with a web series that gained attention mand North American fans, and was quickly moved to Canada’s Cooking Channel. (She’s a bonified spaghetti Canuck) 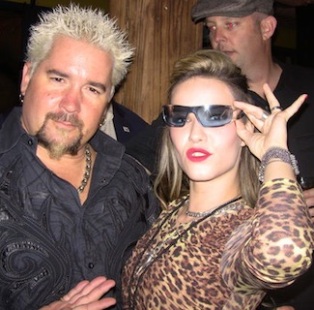 This isn’t a simple gimmick, Nadia G is the author of two cookbooks, and a deep-rooted Italian who knows her stuff, regardless of the fact that she seems like the ditzy and over-the-top girlfriend of a high-profile mob boss.

She cooks with a guitar-shaped spatula, adores leopard-print,  sings “Like A Virgin” on her YouTube channel in her hilarious pseudo French-Canadian/Italian combo accent and says things like:

“Some people call this ‘eating your emotions,’ what else are you supposed to do with emotions?” And writes that many of the best chefs (like herself) have little to no formal training,

“It’s from a long line of bad-ass, home-schooled fierce female cooks that I learned to dish it out. And I ain’t just talkin’ food.”

And, with descriptions like “Dysfunctional Family Pizza Night” and “Wasabi Smashed Potatoes,” and talk of “deflating your meat,” how can you go wrong?