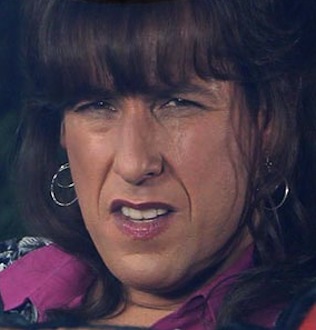 On Friday, Adam Sandler’s latest comedy Jack And Jill wasn’t an easy over-the-top pill to swallow. In fact, the previews for the film featuring Sandler as himself and as his own sister, were more Scary Movie or SNL skit/spoof than reality.

Rotten Tomatoes had Jack And Jill receiving a 0% rating the day it came out, and later a 3% with critics saying things like “More than 24 hours has passed since I watched the new Adam Sandler movie Jack and Jill and I am still dead inside.” (And that’s from Time Magazine)

Brian Orndorf said, “I’m not even sure this qualifies as a real movie,” with Rene Rodriguez of the Miami Herald interjecting, “Left to his own devices, Sandler reverts to his worst, laziest habits.” Key words from ALL reviewers = BAD, SWILL, UNFUNNY and SAD.

Here’s one more reason to NOT see Jack And Jill, and the nail in the coffin for me personally, it’s rated PG. You’re not gonna see Al Pacino barebacking Adam Sandler in a wig and bag lady dress. Damn. (Go see Ides Of March or Meloncholia at your local indie theater, instead)