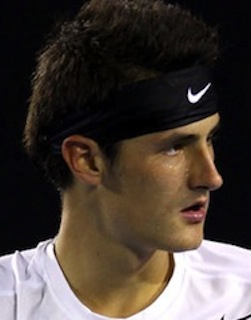 Nineteen year-old Bernard Tomic, the current highest ranked male Australian player and Australian Open contender (he lost to Roger Federer in the fourth round) claims the cops are out to get him.

On Thursday Tomic was spotted revving the engine of his bright orange BMW at pedestrians with his girlfriend. He was pulled over and given one ticket.

A few hours later the authorities attempted to pull him over for a second violation but made it difficult when he reportedly refused and drove directly home.

The quarterfinalist would not talk to the police, forcing them to wait outside his house while he contacted his lawyer. He later told the media that the situation has been blown out of proportion.

‘They’ve given me three tickets and one officer feels like he wants to get me and it’s not a good feeling, it’s all happened on Australia Day when I am trying to have fun with my mates.”

He even said that one officer wanted to “hit him” and that they’re all acting like he’s a murderer. “Something is really wrong. I don’t know what I’m doing, it’s like I’ve killed somebody.”