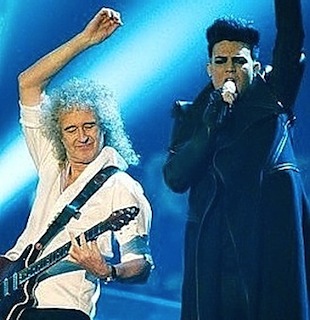 Adam Lambert is filling the heavy and impossible-to-fill shoes of Freddie Mercury and the not-so-impossible shoes of Paul Rodgers (formerly of Bad Company) who toured with the band from 2005 to 2009.

American Idol runner-up Lambert aka “Glambert,” who has drawn comparisons to Mercury for his flamboyant stage presence, told the Daily Star that he has plans to tour with Brian May and Roger Taylor this summer.

He says that the intention is “to pay tribute to Freddie and the band by singing some fucking great songs” and “give it an energy that Freddie would have been proud of.”

After playing a medley of “We Will Rock You,” “The Show Must Go On” and “We Are The Champions” with the young star in November at the 2011 EMAs drummer Roger Taylor told reporters,

“It’s great to be here and actually be appreciated and to have our brilliant genius here, Adam Lambert, wow what a voice, one in a hundred million.”

Adam mentioned during that same interview that he also has “a lot of other things in common” with Freddie Mercury besides music, and that it’s a great progression that he can be “honest and open.”