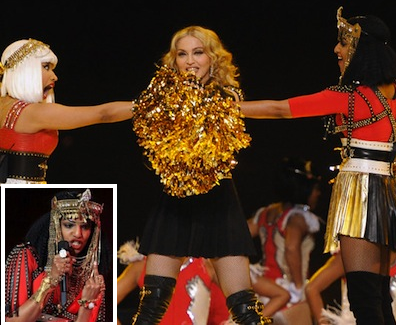 Sunday was Madonna’s big day, sports fans too. The queen of pop took the Super Bowl stage (nearly shattering her hip early on) with several big faces in music such as LMFAO, Nicki Minaj, Cee Lo and M.I.A. taking the stage alongside her.

M.I.A., the British Sri Lankan best known for “Paper Planes” plus raucous comments and behavior, shocked the FCC and a few viewers when she flipped off the camera and crowd during her verse in “Give Me All Your Luvin.” The real thing to keep in mind is that I didn’t notice and neither did anyone else. It’s NBC and the NFL’s fault for drawing attention to it.

Flipping the bird during the line “I’mma say this once, yeah, I don’t give a shit” seems as natural as Madonna teetering onstage like the 53 year-old alder twig that she is, or Nicki Minaj widening her eyes and curling her lips like a recalled blow up doll.

It’s about as harmless as the word “crap.” Comments like, “Our system was late to obscure the inappropriate gesture and we apologize to our viewers” from an NBC  spokesman only draw attention to an issue that would have quickly been forgotten.

The Guardian points out that seeing the wonderfully unconventional M.I.A. dance and perform in a rehearsed manner was much more shocking.