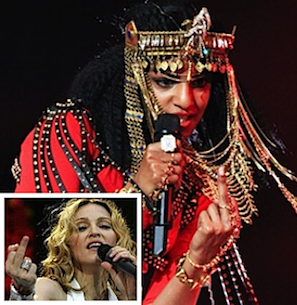 I hope that after this weekend the world will be done talking about M.I.A. flipping the bird at the Super Bowl, myself included. It’s just, not important and it makes my eyes tired just thinking about it.

How many times in your life have you seen someone giving the finger? More than usual probably if you’re an asshole like me, but it’s pretty unlikely to make anyone at all go into cardiac arrest. Even nuns are like “meh, I’m over it.”

Bless Ryan Seacrest’s heart for creating more faux-shocking Super Bowl news when he asked Madonna during his KIIS-FM radio show about the incident, to which she responded, “I wasn’t happy about it,”

She said, “I understand it’s kind of punk rock and everything, but to me there was such a feeling of love and good energy and positivity, it seemed negative…it’s such a teenager, irrelevant thing to do…what was the point? It was just out of place.”

Because Madonna’s never done anything “immature,” you know, that didn’t fit her age. Incorporating pom poms into a dance routine, for instance, or spelling “Love” “L-U-V?”

One thought on “Madonna Unhappy With M.I.A’s ‘Irrelevant’ Gesture”