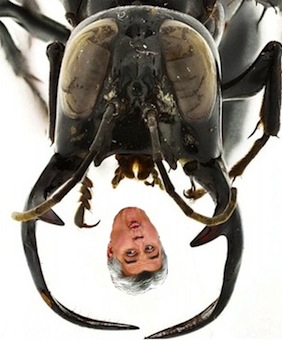 A new species of wasp has been discovered in Indonesia, one with chompers longer than its actual legs which is helpful for defense and reproduction. (“The jaws are big enough to wrap around the female’s thorax and hold her during mating.”)

The ferocious bee is two and a half inches long, more than three times the size of an average wasp and has been dubbed “Megalara Garuda.”

Lynn Kimsey, the University of California professor who stumbled upon it in the mountains of Sulawesi, says she is surprised it can even walk with its current proportions.

The female Garuda (a type of digger wasp) buries other insects she’s paralyzed and then lays her eggs on top of them so that her offspring are born with a nice feast close by. I think I had a horrible childhood, missing out on this experience. Maybe in my next life?

I admit, the scale is all wrong, Jay Leno’s head is much much much bigger than that. Also, the helium laughter he emits after telling an unfunny joke could blow that wasp into eternity. What was I thinking.

One thought on “#1 Reason Not To Visit Indonesia – Giant Wasps”