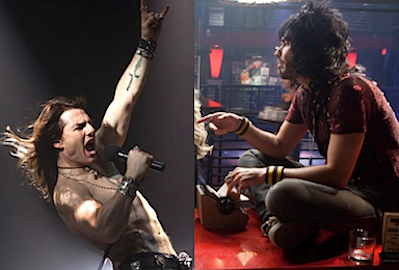 I should briefly talk about the Rock Of Ages movie because I feel oddly obligated, maybe because it looks pretty silly and has a bunch of famous people in it. There’s no way it can be sillier than that Seth MacFarlane movie about Mark Wahlberg and the teddy bear that comes to life.

Rock Of Ages is based on a Tony-winning musical and thankfully, does not feature a stuffed animal that sounds suspiciously like Peter from Family Guy. It stars shirtless Tom Cruise, emo Alec Baldwin, Catherine Zeta-Jones, Mary J. Blige, Paul Giamatti and emo-er Russell Brand.

I know, I’m confusing emo with glam rock again but I just don’t understand how I’m supposed to take this seriously. They made Russell Brand look like he’s wearing a wig on top of his already wig-like hair.

One thought on “Actors With Girl Hair, Singing 80’s Songs!”