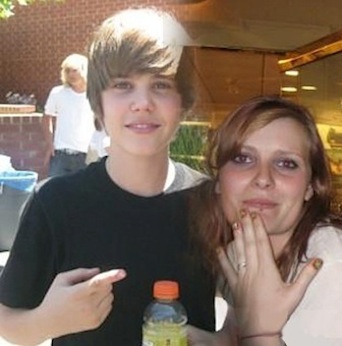 Remember Justin Bieber’s alleged baby mama, Mariah Yeater? The crazy-eyed fan that told a lurid tale of a backstage dalliance with a 16 year-old Justin at Staples Center. In November she demanded a paternity test and $12,000 a month. Nobody took her seriously because that would that have qualified as statutory rape and she was clearly unstable.

Photos of plastic-wrap around her face, rumors that she was hanging out with the true father of her baby, and the fact that she dropped the whole case after Justin volunteered to take the paternity test seemed to prove as much.

Well, for some reason he decided that six months later (Saturday) was the perfect time to poke fun at her by writing, “Dear mariah yeeter…we have never met…so from the heart i just wanted to say…”

Yeah, this is the actual video he posted a link to on Twitter. The “You will never get this” bit from Borat.

Probably best not to aggravate a delusional woman. No matter how wrong she was for accusing him of something that never happened for the sole purpose of making money, this seems really unnecessary.

What a snarky bastard.