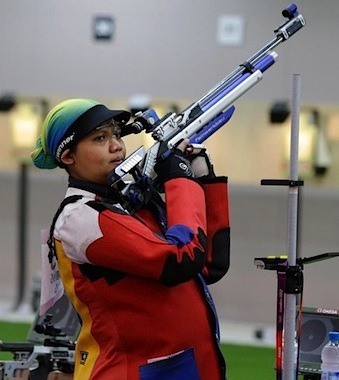 Malaysian shooter Nur Suryani Mohamed Taibi is not the first pregnant Olympic athlete (that title goes to Swedish figure skater Magda Julin in 1920) but she is the most pregnant and first in the Summer Games.

While Julin was three months along, 29-year-old Taibi is a shocking eight months. Besides being with child, she’s the first female from Malaysia to compete in rifle events.

“When I found out that I was pregnant before competing in the Asian meet, I thought that that was the end of my Olympic dream as I will have to turn my attention to the baby,” Nur Suryani told The Star.

“When I eventually qualified for the 10-meter air rifle event on merit, it made me rethink that perhaps I am supposed to go all the way despite my pregnancy.”

She also said that she will talk to the baby before she competes. “[I’ll say] no kicking, stay calm for one hour and 15 minutes only please.”