On top of being compared to Sarah Palin due to his age (he’s 42) and good looks, the internet wants to see Mitt Romney’s running mate shirtless.

In fact, if you Google “Paul Ryan shirtless” images of Glee’s Matthew Morrison topless on the cover of Details Magazine come up, along with a bunch of other half-naked celebrities and sports figures.

We want a map of the abs, not his budget-cutting “Roadmap for America’s Future.”

TMZ even wrote that a source told them that he’s “totally ripped and has a six pack” and was featured on a list of the 50 Most Beautiful People on Capital Hill, 2008.

According to said list, Ryan listens to Beethoven and Metallica. 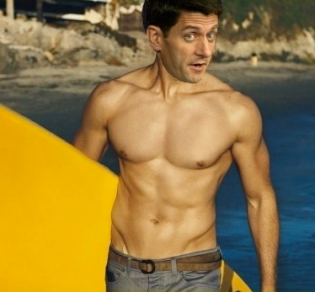