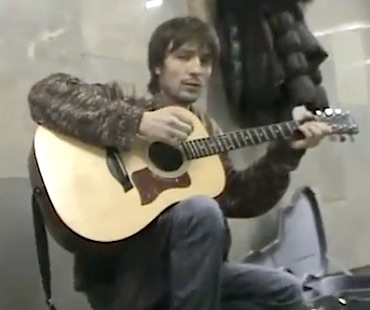 Nikolay Petrovsky is a virtually unknown street performer who speaks no English besides an impeccable impersonation of Kurt Cobain circa 1993’s Grammy-winning Unplugged In New York special on MTV.

Petrovsky is a sailor and native of Novosibirsk, Russia who has been generating buzz on the internet for his spot-on acoustic subway covers of “Pennyroyal Tea” and “About A Girl.” The self-taught Siberian vocal clone of Kurt Cobain tells Life News that he has no interest in being famous. He calls his ability a “gift from god” (few could argue), saying he does not need to drink or do drugs, that “Creativity is possible without it.”

I know you know how refreshing this is. Surely you’ve heard at least one painfully confused rendition and/or sample of Nirvana from either Jared Leto, Karmin, and/or Miley Cyrus?Go Russian Kurt Cobain! Reconsider your interest in fame and tour in the U.S.