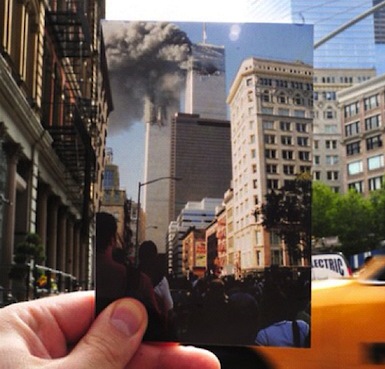 Today marks the 11th anniversary of the terrorist attacks of the Twin Towers and the Pentagon in 2001. During a ceremony today honoring the victims of 9/11, Obama said:

“I’ve always said our fight is with al Qaeda and its affiliates, not with Islam or any other religion, this country was built as a beacon of freedom and tolerance.”  Here’s what a handful of celebrities said about the tragedy on Twitter…

Born and bred #NewYork4Life. Bow your head for the towers today, the souls we lost. Then smile at how far we've come. We Will Never Forget.

My thoughts go out to New York today. For the resilience, compassion, and indomitable spirit of its people.

On a serious note RIP to all people lost from 9/11. I still can't believe I was there when it happened…

We all remember where we were when we heard the news http://t.co/XRy6I3Lb #Remember911 #Sept11

Anniversaries are difficult. Be gentle today with everyone you encounter because you don't know who is grieving. #Sept11

We should never forget this date. Changed the world we live in. Prayers and condolences to everyone affected in 9/11.

May the victims & heroes of the #911 tragedies rest in paradise forever. May their loved ones be comforted. We'll never forget.

As a born and raised new yorker from the lower east side, I will #NeverForget what happened 11 years ago today. #Remember911

"Our greatest glory is not in never falling, but in rising every time we fall." http://t.co/XdNB1s3L Never forget… #remember911

Today, we pay tribute to the innocent Americans’ lives lost 11 years ago. My heart goes out to the families and friends of all the victims.

Remembering #911: In NYC after the attacks and met brave men and women helping w/ rescue effort- the Twin Towers were still smoking.

Read: 9/11: The Photographs That Moved Them Most