I gotta say, X-tina looks good in the new vid. She hid the weight Oprah-style with face contour, dishonest lighting, and triple-layer Spanx.

The opening “No men were harmed” warning label shows she maintained her consistent “feminist” music video theme: Dominance over men while dressed as RuPaul as possible. This video is no exception.

First we see Christina the hitchhiker. To be honest, I don’t know many men who would make out with a roadside stranger who is wearing THAT MANY ACCESSORIES AND NO PANTS. It just doesn’t make sense, it can only end in pink fumes.

Christina then ensures us that she is an independent woman as she teases, “I’ll finish off on my own,” and touches her crotch while wearing Peg Bundy’s tights leaning against a trailer.

Nope, couldn’t wait. She lures her prey, where the script reads: “Christina gives dumb guy #2 mind-blowing avatar-head, the ‘bond’ is so satisfying he passes out in the toilet.”

After the next hair flipping montage, she is in the best “dress for your figure” scene. That black dress with [put it in any one of my] holes just WORKS for her curves, and that Cleopatra hair cut slims her face.

She seduces dumb guy #3 into a pink motel and bludgeons him with a bat making him explode in magenta glitter. The only explanation for this is that the guy was in the closet and she metaphorically freed him.

As for the song, it’s unfortunately that such a talented legend needs that kind of bonky techno auto-tune that should be reserved for younger, less talented starlets (Remember that time Hayden Panettiere tried to make a reggage-y single? It sounded exactly the same as Paris Hilton’s reggage-y single?) 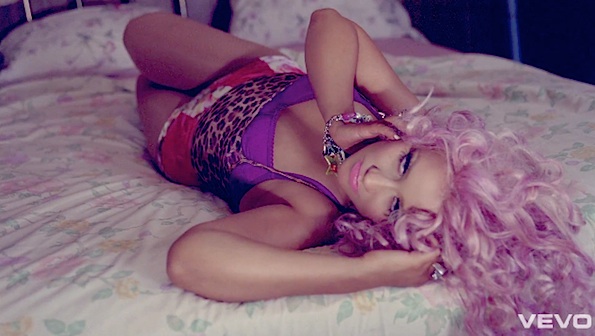 The moral of the story girls is if you flip your hair enough and lick your hands, you will look thinner.

Side note, Candy Man is the best X-tina video of all time.