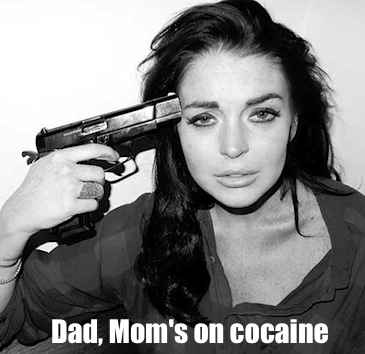 The sword-shallowing club-going mother/daughter duo of Lindsay and Dina Lohan were in a limo on their way to Long Island when Lindsay called Dina “the devil” and accused her of being on drugs in audio of a phone call to Michael Lohan obtained by TMZ.

“Dad, she’s on cocaine. She’s like touching her neck and shit,” LL told her father.

First of all, let me say congratulations to Lindsay for NOT being behind the wheel. I’m very proud of you for simply getting in an argument about money with the whacked-out mother who probably gave you your first line INSTEAD of doing all that AND crashing into a brick wall.

Instead, you’re crashing into the metaphorical brick wall that is your life. This particular wall involves being “kidnapped” and having a gash on your leg from Beelzebub Dina, who steps out of her yayo coma just long enough to say that you’re “dead” to her.

Here’s a funny video to take away the physical and mental pain. Vehicular cancer, and stuff.

3 thoughts on “Lindsay Calls Her Cocaine-Addicted Mother ‘The Devil’”