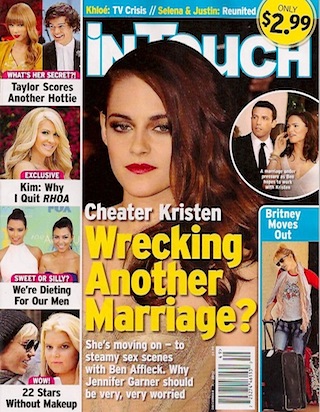 In Touch reports that Kristen Stewart, who went through hell after kissing a married 41-year-old director in a car, is likely to seduce Ben Affleck on the set of movie (Focus) that she hasn’t even been confirmed to star in.

“She’s moving on – to steamy sex scenes with Ben Affleck. Why Jennifer Garner should be very, very worried” the attention-grabbing headline reads.

Remember when Jack in the Box actually became safer to eat at after all those kids died of E. coli in 1993? The same goes for Kristen. And it’s not like she was ever sitting around gnawing on her hair, pointing her Converse at every penis-having human that walked past her trailer.

Everyone forgave Angelina Jolie when she made out with her brother and stole Brad Pitt from Jennifer Aniston because they consider her to be beautiful and a talented actress.

Because no one can completely agree on Stewart’s beauty and acting ability, she’s the devil.