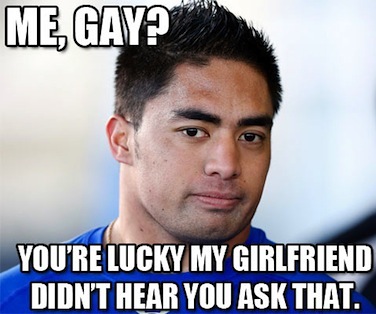 Manti Te’o answered the questions that were burning in the back of everyone’s minds on Thursday’s episode of Katie. Well-worded versions of internet-favorites like “How could he be so f*cking stupid” and  “Is he a homo?”

Turns out, Kekua was very much like a real woman, leaving Te’o clingy, perplexing messages about his time spent with members of the opposite sex.

When Katie Couric asked about the theory that Manti was in on it the whole time in order to cover up his orientation with the typical “Are you gay?” he said, “No. Far from it. Faaaaaaaaaaaaaaaaaaaaaaaar from it.” (Because the more vowels you add, the less dicks you sucked.)

Since I’m leaning towards believing that he didn’t know Lennay was being played by his positively gay acquaintance, Ronaiah, I’d say no, Te’o is not gay. But I have no idea.

Also on the show, Te’o’s parents came out to predictably tell the world that Manti is NOT A LIAR.

Then Te’o talked about the time Kekua started whispering his name when she was supposed to be in a coma, and admitted that instead of “tailoring” his stories after he found out she was fake, HE LIED.

And the Oscar/Razzie goes to….