The Grammys are boring, but you and I, we can pretend they’re not by focusing less on the gaudy “rock” and country music and more on the scandals, bad outfits and cleavage.

J-Lo joked onstage that she couldn’t give a cougarf*cking Casper Smart about CBS’s prude dress code memo, delivering a big f-you in the form of a giant, puffy genital-exposing gam.

Someone wake me up when her and Angelina Jolie’s legs start trolling each other on Twitter.

Taylor shockingly opened the show in Technicolor over Justin Timberlake’s monochrome ode to Tom Ford, and even more shockingly spoke the “So he calls me up and he’s like, ‘I still love you'” part of “We Are Never Ever Getting Back Together” in a British accent.

A total diss on Harry Styles! I’m sure he was sitting a London hotel somewhere looking at her white top hat, thinking about how much he misses her dusty cooch and antique collection.

Read: Seven GIFs and a Video Showing How Taylor Swift and Jay-Z Won the Grammys

Best explained in the TMZ headline, “Rolling in the Drapes,” Adele steered clear of her trademark black in favor of a red long-sleeved getup.

Most disliked it but were afraid to say anything because they all love Mrs. Deepfire (tied three ways with Frank Ocean and Kelly Clarkson for Most Humble) too much to criticize her.

EXCEPT Joan Rivers, God bless her heart, who called Adele “the world’s most talented ottoman” and said the dress was “busier than the defibrillator on Hugh Hefner’s nightstand.” 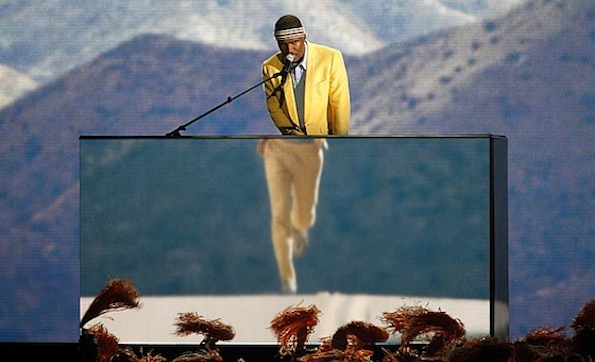 Sunday’s man of the night had to be Frank Ocean. The relatively new artist won a “Best Urban Contemporary Album” (because calling it R&B, Rap or Hip-Hop would just be too damn racist) for Channel ORANGE and another for his vocals on Jay-Z’s “No Church in the Wild.”

Arch nemesis (and complete opposite) Chris Brown’s  uterus was too shattered to stand up and clap for Ocean, whose category win over Fortune was probably sweeter than Marshmallow Mermaid Pie.

Ahh young love. So sweet when you’re in that early part of the relationship, riding in gondolas, exploring each other’s bodies, writing love notes…

Wait, did I say riding in gondolas? I meant getting beat up in a car. And by exploring each other’s bodies I meant needing reconstructive surgery on your cheekbones. And by writing love notes I meant discovering that he’s been secretly texting Karrueche Tran the whole time.

On a nicer note, Rihanna didn’t win anything but looked and sounded amazing singing “Stay” and “Could You Be Loved.” 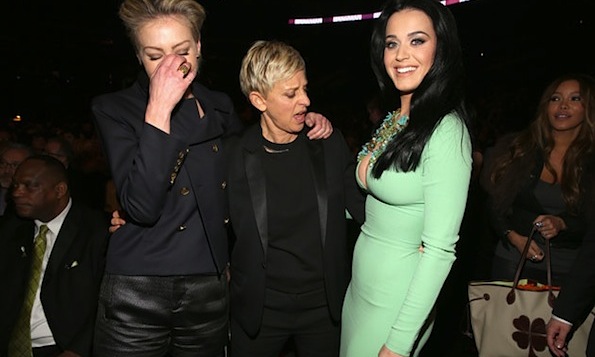 Who else didn’t care about the memo? Katy Perry, of course! (You know you’ve entered another dimension when Jenna Jameson is wearing more than you.) Katy parked her mint green jugs next to her lovely beau John Mayer, looking demure and/or boring.

Mayer recently admitted in an interview [directed at, and conducted by Katy Perry] that he was a “jerk” in past relationships and has since given up on trying to make everyone like him. Buying that about as much as I’m buying an eco-friendly mansion in Calabasas.

If I could throw three Grammy attendees in a meat grinder I would choose Chris Brown, Tyler The Creator and Amber Rose. Maybe I’d wait until she gave birth, seeing that I’m such a kind and forgiving lady, but that cow is going in face first. The smoke monster from Lost can adopt the baby.

This woman is so talentless she makes me want to shower Kim Kardashian, Paris Hilton and the real housewives with Nobel Peace Prizes.

And her husband. Oh lord. Not going in the grinder because, again, I’m a kind and forgiving woman, totally not for the systematic murder of people whose brain cell count doesn’t exceed the number of papers in a pack of Zig-Zags.

Khalifa told E! News that he wanted his bride to “stay pregnant forever” so I don’t feed her to the Sarlacc Pit Monster. I can see from the curvature of her spine that the weight of sweet little Green Ivy may snap her in half before I get there. BLAST!

Wow. Making fun of talentless people (above) really took it out of me, leaving nothing for talented Florence and her paleolithic Givenchy dress. Just look at it. Look at it like you looked at Yennifer’s leg!