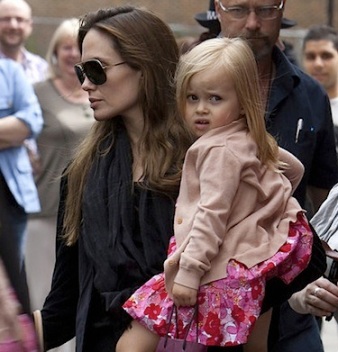 I always knew that if I was going to have children, I’d have a whole Bekins truck full of ’em. At least enough to cover the offense and defense lines of the Edmonton Oilers or conduct in a band like The Jackson 5 or Selena y Los Dinos.

Spider-hand broodmother Angelina Jolie is no dummy either. After four long years of prestigious drama courses at Juliard, Vivienne Jolie-Pitt, born in 2008 as one-half of the most expensive twins in history, is ready for her acting debut.

The blonde, younger sister of Shiloh is set to star in Maleficent alongside Angelina, Elle Fanning, and Juno Temple. Siblings Pax and Zahara have been cast in smaller roles, with paychecks never exceeding Vivienne’s reported $3,000 per week.