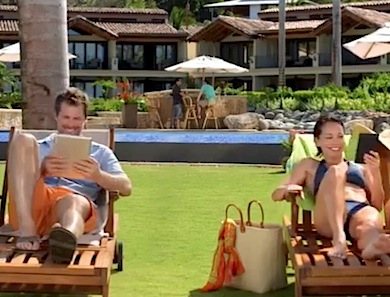 Today, during that educational show about Armenian mating rituals, my teeth almost fell out of my face when I saw the new Kindle ad with a surprise ending.

The man expresses frustration at not being able to see due to the glare on his device (this is the boring part), so the woman explains that the built-in light in her Kindle is oh so wonderful, even in the sun. Then he’s like, “I just spent over $100, let’s celebrate…”

For a split second, you think they’re going to go on a date and The Notebook-loving sap in you is excited, but then she says she has a husband. What a bummer, except, he has a husband too! Awwww.

They all wave at each other and become best friends forever. This is spectacular because I can’t barely remember seeing an interracial couple in an American commercial, let alone a gay one.

Tip your hats to Amazon’s wonderfully supportive CEO Jeff Bezos and his wife, who donated $2.5 million in support of Washington’s gay marriage referendum in 2012.