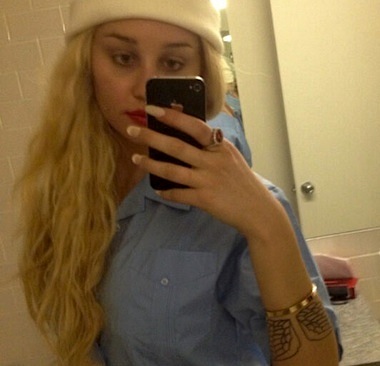 For months people have been scouring Amanda Bynes‘ tweets, wondering which mental disorder she has. “Sources” pointed to bipolar and schizophrenia, but Bynes herself has revealed the answer.

I have an eating disorder so I have a hard time staying thin.

They write a news article about every tweet I write and I hate the pictures they choose. They repeat what I tweet then add a bad photo.

Only use photos from my twitter when writing an article about me.

The main issue with eating disorders and self-harm is control, so it makes sense that she’d pretend photos of her (with her signature cheek piercings) walking around L.A. are of someone else.

She hates not having control over what the public “sees” of her, with absolutely no qualms about what they think of her actions. Thus the vagina murder and retirement at age 26.

One thought on “Amanda Bynes: ‘I Have An Eating Disorder So I Have a Hard Time Staying Thin’”