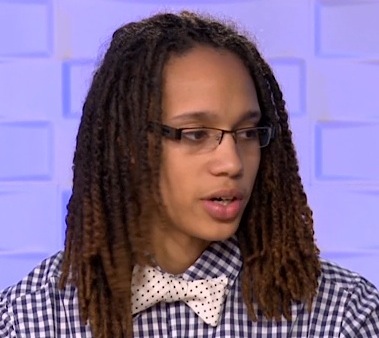 At 6’8,” Baylor Bear Brittney Griner is beyond tall enough to dunk. She was just drafted #1 in the WNBA and is one of the few female basketball players who should really be allowed to play against men.

As of April 17, she is also openly gay, and no one seems to care. But is that progress, or bias?

“I really couldn’t give an answer on why that’s so different,” Griner responded after being asked why people seem more accepting of gay women in the WNBA. “Being one that’s out, it’s just being who you are.”

“Again, like I said, just be who you are,” she continued. “Don’t worry about what other people are going to say, because they’re always going to say something, but, if you’re just true to yourself, let that shine through. Don’t hide who you really are.”

Male athletes like John Amaechi, Esera Tuaolo, Billy Bean, and Wade Davis of the NBA, NFL and MLB didn’t dare come out until after they had retired from sports, but it’s a different story for women.

Many major tennis players, notably Billie Jean King and Martina Navratilova, came out while they were still active. While no one would say it was “easy” for them, it’s hard to argue that people aren’t slightly less frightened or threatened by lesbians than they are of gay men.

Outsports.com founder Jim Buzinski pointed out that “everyone’s head would have exploded” if a man had done exactly the same thing.

With hip-hop artists like Frank Ocean and actors like Matt Bomer coming out, many think it’s time for a guy in a jersey or helmet to do the deed. If not simply to help others who might be fearful to do so themselves.