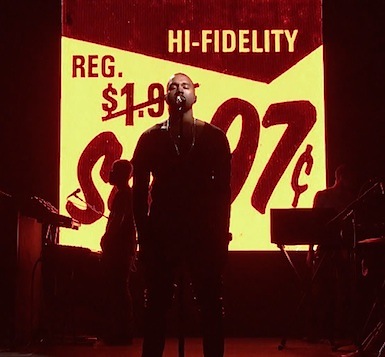 One, “Black Skinhead” sounded oddly like a darker version of the non-Ke$ha rap part of Flo Rida’s “Right Round.”

The other, “New Slaves,” is Kanye’s hateful ode to capitalistic society, injustice, and the paparazzi.

For shock value, Kanye draws a few ridiculous comparisons to celebrity and slavery.

“I’ll move my family out the country so you can’t see where I stay, so go grab the reporters so I can smash their recorders” he sings.

So just how offensive is this notion? I’m just a white woman born long after the 1800s, but I’d say it’s pretty damn offensive to compare human beings who had less rights than domesticated pets to rich folks who can’t grab dinner at The Ivy without getting their picture taken.

Is it right that I want to make a joke about Kim Kardashian’s swollen, enslaved feet being shoved into shoes three times too small? No. But I’m doing it anyway. (Pretty sure that was Kanye’s thought process too.)