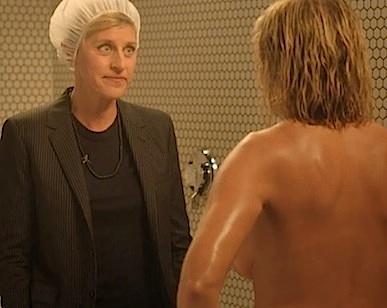 Chelsea Handler is making a big, well-publicized move from E! to Netflix for a reported $10 million.

Later, Jennifer Aniston, Sandra Bullock and 50 Cent appeared along with Miley, Selena Gomez and Gwen Stefani for an intervention and some live music, because what’s more likely to get ratings than awkward nudity and oodles of celebrities?

While there’s no word on exactly how Chelsea’s Netflix talk show will be different, it seems fair to assume that it will be a lot raunchier. Still blurry, but a smaller radius of blur.

Does anyone else find these shower scenes extremely unfunny and poorly edited? Like failed SNL-skit-from-last-season unfunny.

2 thoughts on “Chelsea Gets Nude in the Shower with Ellen”