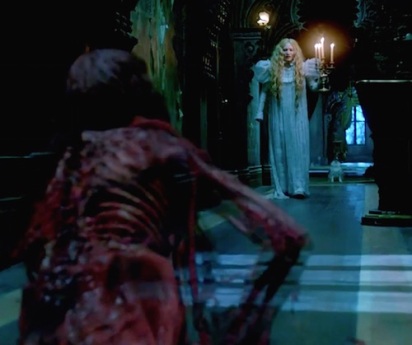 Crimson Peak — Guillermo del Toro‘s return to cinematic horror since his action-heavy ode to Japanese monsters (Pacific Rim), TV vampires (The Strain) and comic books (Hellboy) — stars Mia Wasikowska as a girl living in a haunted house who moves to a much more haunted house to be with a mysterious man (Tom Hiddleston) and his sister (Jessica Chastain) in 19th century England.

There’s blood in the pipes and ghosts in the floor, but she doesn’t leave presumably because of Hiddlestain’s sinister plan to, I dunno, kill her in some overly elaborate way that leads to an equally complex but fun plot twist right before the credits roll.

It looks at least as good as the del Toro-produced Don’t Be Afraid of the Dark but probably can’t compare to Pan’s Labyrinth no matter how many times Charlie Hunnam flashes his buns. (He plays a seemingly sane doctor in the movie, but you never know.)