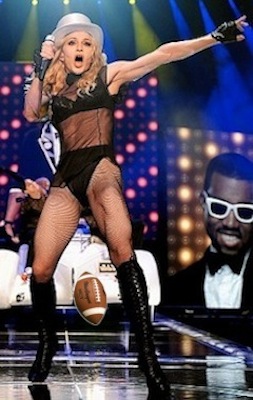 Sports website SB Nation is claiming that Madonna will perform at the super bowl on February 5, 2012. This is good because, if there does happen to be some sort of apocalypse, Madonna surely would survive, being an ageless supernatural succubus who can easily survive on seeds and ashes.

The 53 year-old queen of pop would follow previous acts (since the Janet Jackson mishap in 2004) such as The Black Eyed Peas, The Who, Springsteen, Tom Petty, Prince, The Rolling Stones and Paul McCartney.

The super bowl this year will take place at Lucas Oil Stadium in Indianapolis, Portland Pterodactyl Vs. South Carolina Sabertooths. Oh wait, that doesn’t exist. Is there a better candidate than Madonna? Yes! Her name is Lady Gaga (or Rihanna)…

END_OF_DOCUMENT_TOKEN_TO_BE_REPLACED

A cop in Santa Fe, New Mexico was caught on a Canyon Ranch security camera having sex on top of a car. It wasn’t a cop car, but he was in full uniform, so it’s causing quite a ruckus with the press.

The officer, Bert Lopez, is not being charged with a crime but is on administrative leave until the media frenzy dies down a little.

“At this point we do not believe any criminal activity occurred.”