Lady Gaga‘s self-directed “G.U.Y.” video (with a hint of “Venus”) starts like The Walking Dead and The Hunger Games and ends with gold, and lots of it. Brutal rags to endless riches, with Gaga sporting the longest hair extensions ever and humping the air like a female Bobby Brown, only with more crack.

The queen of pretension (she let someone vomit on her at SXSW in the name of “creative rebellion”) really outdoes herself this time. An 8 minute video with 3 minutes of credits? The sheer laziness of this makes me want to jump into an active volcano.

Did I mention that she brings Michael Jackson, Jesus and Gandhi back from the dead?  END_OF_DOCUMENT_TOKEN_TO_BE_REPLACED 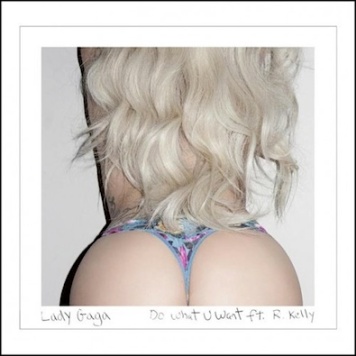 Speaking of asses, Lady Gaga duets with R. Kelly on her hotly anticipated third album, ARTPOP, in a song called “Do What U Want.”

If you’re asking “why?,” keep in mind that Gaga is like all perfectionist pop stars in that she doesn’t like being overshadowed by others. This is why she’s never toured with anyone particularly special, and, with the exception of Beyonce, collaborates with irrelevant weirdos like R. Kelly, New Kids on the Block and Colby O’Donis (“Just Dance”).

With lyrics about roughing up haters and not being sorry, the song is truly horrible.

My favorite part is the chorus, which goes something like “You can’t have my heart and you won’t use my mind, but do what you want with my body,” because it’s basically an open invitation for R. Kelly to open his fly and pee all over her sad white chest.

Lady Gaga has been quite the busy bee this week, unveiling her ARTPOP album art in Times Square as well as the entire 15-song tracklist and a new song from Robert Rodriguez’s Machete Kills soundtrack, which hits theaters tomorrow and features Gaga in her acting debut as the mysterious temptress La Chameleón.

The titles are a sort of personalized Scrabble board of obvious Gaga-esque obsessions (Versace, manicures, fashion) and super duper artsy stuff like drugs and wet dreams. Really Gaga, Mary Jane Holland? …Most obvious weed reference EVER.

Lady Gaga‘s new video for “Applause” is here and it’s basically the most literal definition of drafty local theater stale popcorn and feet-smelling performance art. (And good luck getting it out of your head.)

She keeps saying she’s combining pop and art as if it’s never been done before when even SHE’S done it before with every video from Born This Way and The Fame Monster. Now she’s waving a sheet in a black leotard in her neverending quest to show skin without being sexy…

Gurrrrlll. You better kiss all five members of ‘N Sync at the VMAs to make up for this weak shit. 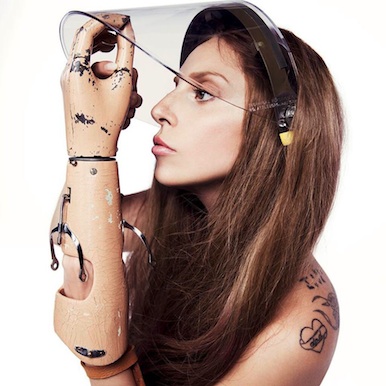 Lady Gaga is a crazy weird bitch, right? In a good way, mostly. No matter how much she sprawls out naked for Vogue, or Terry Richardson or her performance artist friend’s nonsensical crystal-worshipping Kickstarter campaign, she writes decent music and has always been honest about the negative parts of her past. The only problem actually, besides pretentious crap like this prosthetic arm, is that she’s annoyingly against bullying and negativity.

Now I know you’re going, “Wait a second, bullying is never a good thing, you’re an awful human being for saying that,” but hear me out. Gaga recently ranted against little ol’ websites like mine, writing the following on Facebook and Twitter:

Dont focus on ANY blogger criticism. I have been a producer/songwriter/musician for over 10 years. Trust the artist, bloggers are not critics. The fans + music scholars are the best critics because they know the artist intimately.‪#‎STOPHarassingTheArtist‬ we are here to entertain you.‪ #‎FreeTheArtist‬‪ #‎StopTheDramaStartTheMusic‬

Now I know firsthand that people hate the word “gossip” because it makes them feel dirty. But it’s like sex, we all do it, and we all secretly love it. According to Merriam-Webster, it can simply mean “a chatty talk” or a “rumor or report of an intimate nature.” According to Gaga, it’s all bad:

I like to think of it as the simple sharing of any and all information. Hell, I like to gossip about myself. For years people have been badmouthing gossip bloggers (hypocritical much?). We’re like the new paparazzi: career-ruining assholes who will do anything and everything to put a stick in the wasp nest.

But think about it, when was the last time the paparazzi made you laugh (besides when Kristen Stewart’s telling them they don’t deserve to breathe the same air as her) or shared a good recipe with you? Yeah, some of us leak songs on occasion, but we also promote artists (like Gaga) by constantly talking about their bleached anuses and the golden snot rockets bowls they use as moisturizer.

I’m saying be grateful. A lot of your fans are bloggers. A lot of bloggers (me) overpaid to see you in concert and found the experience generally enjoyable besides that stuff about locking the freaks outside.

END_OF_DOCUMENT_TOKEN_TO_BE_REPLACED

Lady Gaga has popped out of a recording studio crevice to announce the release date of her third full-length album, ARTPOP. It is due on November 11, 2013, according to her Facebook. Seems like a long time but at least the Little Monsters will have a BRAND NEW single on August 19, 2013 to satiate their fanatical needs.

Lady G has been working with DJ White Shadow, RedOne and others since 2012 on a boatload of songs that will probably sound like Cher fell into a blender with My Little Pony and Strawberry Shortcake.

Scratch that and replace with Jem and the Holograms. Every time she describes the ARTPOP experience I think of Synergy introducing herself as a “holographic computer designed to be the ultimate audio-visual-entertainment synthesizer.”

Turns out, ARTPOP is going to be more than just an album.

It will be an app for your iPad, iPhone, Android, and computer which will allow fans to chat with each other about Lady Gaga and her music, play games, and receive “important” updates from Mother Monster herself.

“Im excited to tell you all that ARTPOP is going to be a multimedia experience that comes in different forms,” Gaga writes.

I think this is especially confusing because everyone already thought her new immersive social media platform (LittleMonsters.com) had satisfied the narcissistic attention-craving artist within.  END_OF_DOCUMENT_TOKEN_TO_BE_REPLACED

Lady Gaga posted a photo of her new “ARTPOP” arm tattoo (I’ve flipped the image so it no longer appears backwards) on Twitter, and the words “new ink new album.”

On her new social networking site Littlemonsters.com the photo was accompanied by a different message, “We could, we could belong together. ARTPOP.”

This is her fifth tattoo, and since we all know the story behind the ink on her left thigh (“Born This Way” and a unicorn), is it safe to assume that Artpop is the name of her third album? There’s a strong possibility, but I care less about the name and more about the theme. I’m hoping for less greasy Jesus-y ex-boyfriends in corn fields and more disco sticks.  END_OF_DOCUMENT_TOKEN_TO_BE_REPLACED