There isn’t a single woman Chris Brown comes into contact with that doesn’t get hit. Sometimes it’s figurative, but it happens. Do I have love for star fuckers? No, but I have a lot less love for the man who made Rihanna look like a chump. It’s his fault ‘Anti’ still hasn’t been released AND that it’s cold in winter and that I’m broke, and also, he killed Natalie Cole, but not a lot of people know that, so shhh.  END_OF_DOCUMENT_TOKEN_TO_BE_REPLACED

Beyonce was pushed and shoved like a Croat prison bitch in Belgrade, Serbia on April 15 at Kombank Arena. (The exact place she debuted those wonderful golden sandcastle nipples.)

Fans, if you want to call them that, grabbed at her weave, ping-ponging her between the aisles in a scary moment captured by a concert bystander. Bey’s bodyguard appears to do little to remedy the situation. 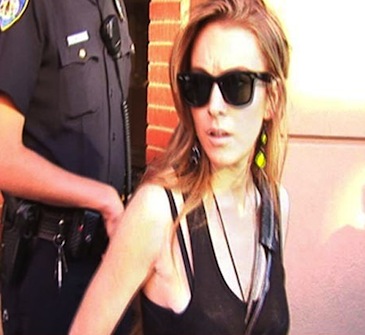 Lindsay Lohan told law enforcement officials that she was attacked by a 25-year-old man she met at the Chelsea night club 1 Oak and brought back to her hotel room in Manhattan with a group of friends.

According to police sources the argument started at around 4:30 a.m. on Sunday, September 30 over candid pictures and videos he’d taken of her.

After taking his cell phone away he reportedly threw her on the bed and scratched her.

She ran out of the room and into the stairwell then back into the room where he choked her and threw her to the ground a second time.

Friends eventually pulled him off and he was arrested while still in the hotel.  END_OF_DOCUMENT_TOKEN_TO_BE_REPLACED