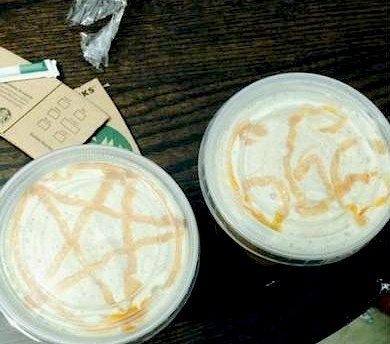 A Baton Rouge woman who bought coffee at a Starbucks at the Mall of Louisiana received a large amount of both humorous and concerned comments after sharing a picture of her two drinks.

With a matching “666” and pentagram art drawn in caramel, the woman, Megan K. Pinion (so close to the ultra satanic “minion”) wrote that while she was “in no way judging” the beliefs of the barista, she judges his “lack of professionalism and respect for others” and was “appalled” by the imagery.

“I am a teacher in the public school system and if I were to present a child of atheist or pagan believers with a Christian art project I could be sued in a heartbeat,” she stated.  END_OF_DOCUMENT_TOKEN_TO_BE_REPLACED