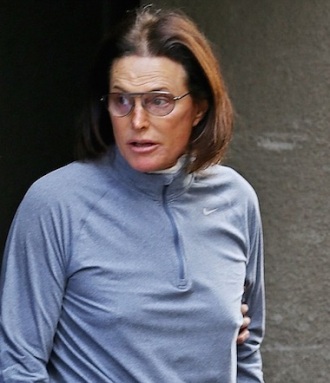 After reading countless gossip articles telling us basically that the Jenner/Kardashian patriarch Bruce Jenner is becoming a woman all because he likes to wear his hair in a ponytail, I decided the “news” was probably nonsense, but finally, after seeing him with, as the Washington Post points out, long highlighted hair, a French manicure, diamond earrings and lip gloss and his own stepdaughter Kim Kardashian confirming that he’s filming a docuseries about his “journey,” it seems that yes, Bruce Jenner is actually becoming a woman.

An Us Weekly source alleges that Bruce has wanted to transition from male to female, or at least enjoyed wearing women’s clothing, since his Olympic golden days.  END_OF_DOCUMENT_TOKEN_TO_BE_REPLACED

That spicy vampire who spends his few allotted hours off the Kardashian leash constructing toy helicopters and giving motivational speeches insists he isn’t becoming a woman despite rocking a ponytail and contemplating a Laryngeal Shave following his separation announcement from Kris Jenner.

When TMZ caught wind of a rumor that the elder lesbianic Jenner was considering getting his Adam’s Apple sawed off, Bruce confirmed the tale but specified that he is NOT undergoing getting gender reassignment. His exact words: “I just never liked my trachea.”

If he’s not becoming a woman I don’t want to be one anymore. Everyone show solidarity and support by mailing Bruce one high heel and one tube of Ruby Woo lipstick.