Last standing Smashing Pumpkin Billy Corgan journeyed deep into the land of pretentious toolbags when he said that he’d rather listen to Bach than modern music, but he does have a point. The former “friend” of Courtney Love and Jessica Simpson says he purposefully keeps himself out of the music loop due to it all sounding like the same heartless, whistling pile of steamy cow poo.

“I just don’t hear as much progress in rock and roll as I once did,” he told Compass Magazine. “So rather than get frustrated or feel like I have to take a position, it’s almost better to just kind of be ignorant.”

“I mean it’s easier to listen to Bach,” he continued. “It’s timeless. And maybe that’s my biggest critique of modern music – it somehow seems the same every year. I will literally go into a coffee shop and I can’t tell you if it was from eight years ago or it just came out because somehow Bono must have had 10,000 children and they all ‘wo, wo, wo’ through the chorus.”  END_OF_DOCUMENT_TOKEN_TO_BE_REPLACED 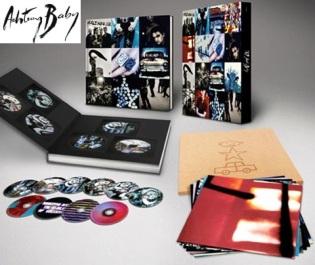 This November 19th will mark the date of the the 20th anniversary of U2‘s seventh album, Achtung Baby, originally released in 1991.

A lavish 6 CD box set including a documentary by Davis Guggenheim, unreleased songs such as b-sides and remixes and even some cover songs, will likely release on October 31, 2011.