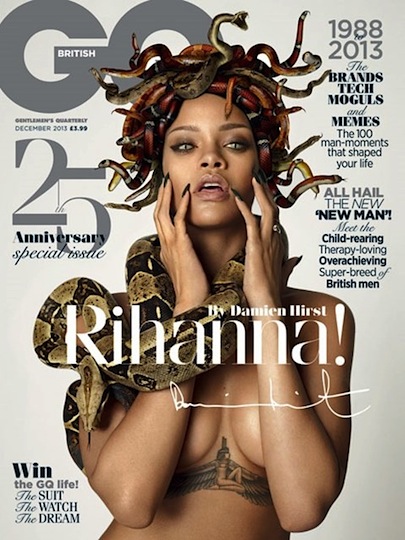 Rihanna joins acclaimed art director Damien Hirst for British GQ’s 25th anniversary issue all decked out in snakes looking like a voodoo queen sidekick of Angela Bassett in American Horror Story: Coven. (DID YOU SEE her sitting on that elaborate throne playing Solitaire on an iPad?)

Rihanna’s interview from the December edition of the magazine isn’t available yet, so here are some quotes from her recent sit-down with Glamour.

On being bullied / developing a thick skin: “I got teased my entire school life. What they were picking on I don’t even understand. It was my skin color. Then when I got older, it was about my breasts. But I’m not victimized – I’m grateful. I think those experiences were strategically put together by God for the preparation of being in the music industry. It’s so easy for me to deal with the bullsh*t now.”

END_OF_DOCUMENT_TOKEN_TO_BE_REPLACED

Link from Zelda met Skrillex and they made a browser game together. (Kotaku)

Billboard Woman of the Year Katy Perry talks about why she’s undeserving. (411 Mania)

Patrick Stewart and Ian McKellen returning to X-Men in Days of Future Past. (Huffington Post)

Breaking Dawn star Ashley Greene covers British GQ‘s December issue (on newsstands November 1) with the subtitle “Ashley Greene wants to be a BIG movie star. Have you got a problem with that?”

I wasn’t aware there was a riot parade of people protesting Ashley Greene’s fame.

She hasn’t been in many movies besides Twilight. Recently LOL (3.4 rating on IMDb), The Apparition (4.2) and the upcoming film CBGB, by the director of Houseguest.

I’m not saying she can’t act or won’t be a big star outside of Stephenie Meyer stuff.

Many actresses end up in flops before that one big [credible] project comes along and shoots them out of the straight-to-DVD abyss. I can see her being somewhere in Rachel McAdams. Romantic comedies might work. Here are some dating-related interview highlights: END_OF_DOCUMENT_TOKEN_TO_BE_REPLACED 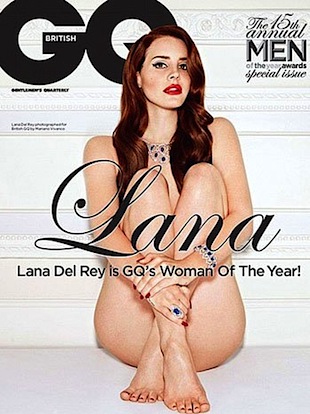 Lana Del Rey shares the cover of British GQ’s 15th Annual Men Of The Year Awards issue with four people. She has the obvious distinction of being the only one with ovaries, ovaries she almost displays in a naked, leg-hugging embrace.

Turns out, it was neither the editor-in-chief or photographer who convinced seemingly reclusive Lana to wear nothing but blue jewels on her neck and finger. It was her stylist, Johnny Blueeyes whose “support and direction was invaluable ” in the production of her cover.

I thought OTHER people couldn’t keep their clothes on in her presence. Lyrical proof: “You can’t keep your hands off me, or your pants on” #NationalAnthem