Con: Steven Spielberg and Michael Crichton are pretty much MIA.

Pro: Chris Pratt. Con: The dinosaurs look about as lifelike as Thanksgiving turkey.

Dudes will love the new full-length Guardians of the Galaxy trailer because goofball Chris Pratt is the male version of Jennifer Lawrence. He is every man’s imaginary BFF and every woman’s imaginary boyfriend.

It looks GOOOD partially thanks to virtually unknown director James Gunn, but mostly because of Chris. 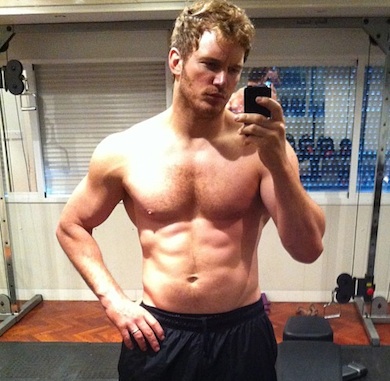 Chris Pratt’s Parks and Rec’s co-stars are giving him a hard time about the hard body he acquired to play Peter Quill/Star-Lord in Marvel’s new superhero franchise, Guardians of the Galaxy.

After Pratt, who plays the adorably goofy shoe-shining lowlife Andy Dwyer on the hit NBC comedy wrote “Six months no beer” on Instagram along with the photo, Rob Lowe replied “You CANNOT return to Pawnee like that!”

The best by far was from Retta (Donna) who totally wants him to guard her galaxy. “STOP IT!!!!!!! Look at YOOOOUUU papi. #NotMadAtIt.”

Like many women of the 20-something age group, I first saw Chris Pratt as a completely cliché, granola-munching hippie on The O.C.

The more he traipsed around in plaid talking to Summer (Rachel Bilson) about spirit animals the more I disliked him as an actor and person. Only a minor change of heart occurred when I heard he was dating Anna Faris, because I figured she wouldn’t get with a humorless square.