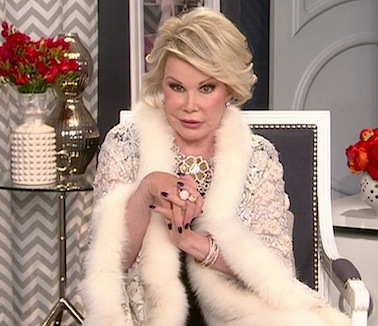 Almost nothing irks me more than celebrity apologies. There’s nothing less genuine and more weak than saying you’re sorry for something you meant to do or say. If any one profession is immune to the pressure of releasing cowardly statements through their frantic PR people, it’s comedians.

Here’s a recent joke about Heidi Klum that Joan Rivers has come under fire for after a special Oscars-edition airing of Fashion Police on Monday:

The last time a German looked this hot was when they were pushing Jews into the ovens.

Oh no! It’s not like the very funny, very Jewish Joan doesn’t make jokes like this every week. Her favorite topics include WWII, tampons, plastic surgery and obesity…  END_OF_DOCUMENT_TOKEN_TO_BE_REPLACED

I don’t agree with the use of the word “talent” in the title “America’s Got Talent,” let alone America’s opinion or the judges. Usually I agree with Howard Stern, except in the case of comedian Melinda Hill, who bombed horribly on Tuesday’s YouTube auditions.

When I say bombed I mean that the crowd was more silent than if Daniel Tosh performed at a charity for RAINN.

The judges critique was along the lines of her needing different material. But it was also mentioned that her videos on YouTube were much funnier than her set on AGT.

I researched these supposedly hilarious videos (I already liked her jokes on America’s Got Talent) and found that she was on The Late Late Show with very similar material, getting laughs.  END_OF_DOCUMENT_TOKEN_TO_BE_REPLACED

Instead of dressing up as Penn State’s Jerry Sandusky at the Comedy Central roast of Roseanne Barr, he wore the glasses of Joe Paterno.

The veteran insult comedian who was recently named the host of a half-hour show called The Burn with Jeff Ross, has stepped it up. He wore nothing but a leather jacket and revealing black underwear to 2010’s David Hasselhoff roast.

On this year’s getup, he cleverly told the Hollywood Reporter, “If they’re offended by what they see, they can do what Joe Paterno did – look the other way.”

END_OF_DOCUMENT_TOKEN_TO_BE_REPLACED

East coast original Patrice O’Neal, known for his stand-up, VH1 commentary (I love the 80s/70s) and most recently for his set at the Comedy Central Roast of Charlie Sheen, passed away yesterday due to complications from a stroke he had on October 19.

The frequent Opie & Anthony radio guest who was a longtime diabetic, brought a lot of intelligence and thoughtfulness blanketed in brazen sarcasm to everyday culture, such as his hatred for certain tattoos. (“So what your third cousin got shot, so now I gotta look at his fuckin’ face?”)