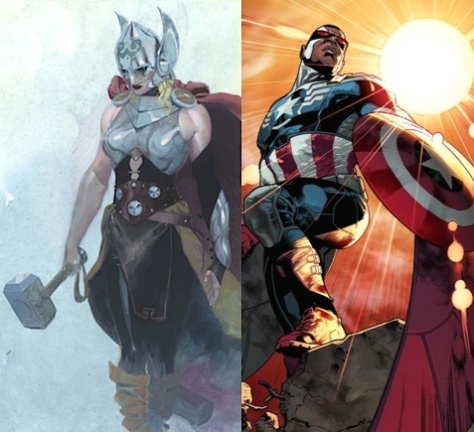 Every year at Comic-Con we see bundles of gender and race-flipped superheroes, and now, to delight of cosplayers everywhere, female Thor and black Captain America are a reality in the Marvel universe.

Steve Rogers is passing his shield to Sam Wilson a.k.a Falcon (played by Anthony Mackie in The Winter Soldier) and Thor’s hammer is being picked up by a woman.

Introduced in 1969, Falcon was the second mainstream black superhero ever after Black Panther in 1966, and the first to hail from the U.S. As for Thor, we’ll have to wait until October to find out about the mysterious woman who takes the place of the original and what he did to no longer be worthy of the title.  END_OF_DOCUMENT_TOKEN_TO_BE_REPLACED 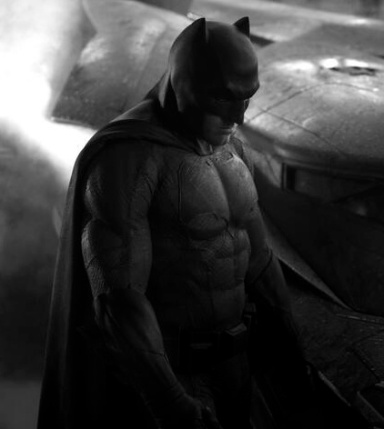 Holy black and white gimp suit! It’s Ben Affleck’s unmistakable chin cleft protruding out of a mask in the first official photo from Batman vs. Superman…

I’m not 100% sure what these two famous superheroes are fighting over besides money at the box office, but Bruce Wayne is sort of the Samantha Jones of Gotham, so I figure he’s speeding into Metropolis to throw Amy Adams in his trunk because she has a thing for guys who play Batman.

Yeah the logo on the chest is larger and looks more like the inkblot from Batman Forever, the ribbing on the stomach is completely different from Christian Bale’s caped crusader and the seams (some thought them to be veins) are also super pronounced, but I’d rather make fun of how emo and not-stoked-at-all about the Batmobile he looks.

This is not the face of Batman, this is the face of a teenage girl on My Super Sweet 16 whose parents got her a Kia.

Amy Schumer has been all over the place lately. It wasn’t after I found out that the show she’d been gifted by Comedy Central, Inside Amy Schumer, had exceptionally good ratings, or when a story she told that seemed to only be about a drunken college encounter with a man who basically fell asleep with his head inside her vagina turned into a surprisingly empowering speech about self-worth made her a headline on every pop culture website, OR even when I heard that she had written a movie with the help of non-other than Judd Apatow that I realized how famous she’d become…

It took my brother uttering her name at an early Mother’s Day celebration dinner for me to finally understand exactly how gigantically popular and successful Amy Schumer is. I can’t even escape Schumer when I’m spending time with my Mom and brother, two of the most outdoorsy, least TV-watching people who have always cared more about dehydrating papayas and getting a good deal at Goodwill than celebrities.

END_OF_DOCUMENT_TOKEN_TO_BE_REPLACED

Dudes will love the new full-length Guardians of the Galaxy trailer because goofball Chris Pratt is the male version of Jennifer Lawrence. He is every man’s imaginary BFF and every woman’s imaginary boyfriend.

It looks GOOOD partially thanks to virtually unknown director James Gunn, but mostly because of Chris. 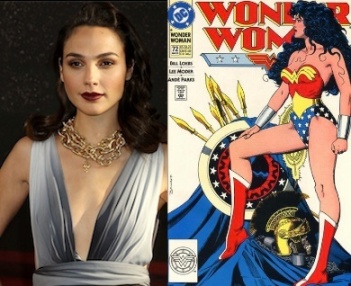 The sequel to Man of Steel is now a Superman, Batman AND Wonder Woman movie. Zack Snyder announced the news today that Israeli actress Gal Gadot would be playing the beloved female DC superhero in his next film.

Gadot, a former model turned movie star thanks to the rebooted Fast & Furious, may be the sole female star of the upcoming Justice League film as well. (Unless they decide to incorporate lesser knowns like Hawkgirl, Black Canary or Zatanna.)

Our new Diana Prince (WW’s alter ego, for those of you unfamiliar) was famously portrayed by Lynda Carter on TV from 1975 to 1979. Today’s role was thought to be handed to Megan Fox a handful of years ago, and Adrianne Palicki (Friday Night Lights) was more recently cast in a failed NBC pilot.

Wonder Woman’s abilities include super fast and agile butt-kicking. And she has an invisible jet that I’m sure Snyder will turn into a super cloakey stealth plane to appeal to today’s audience.  END_OF_DOCUMENT_TOKEN_TO_BE_REPLACED

Zack Snyder impressed me with Man of Steel even though I was slightly disturbed that Superman put his poor mother through the ringer destroying her house, basically killing her husband and his adopted father by respecting his stupid prideful wish to die in a tornado and then barely offered her a hug as consolation before he flew away.

Fortunately, Batman is going to save the day in the sequel, teaming up with Superman as superbros for DC life because they have to at least try to compete with Marvel. And who knows, maybe Joseph Gordon-Levitt will show up as Robin ala World’s Finest Comics?

The role of Batman, best played by Michael Keaton and I guess Christian Bale, has been officially scooped up by Ben Affleck. This is all dandy with me because he at least has dark hair and a cleft chin and probably won’t talk in that horrible voice that Bale also used in Terminator.  END_OF_DOCUMENT_TOKEN_TO_BE_REPLACED

Comic-Con 2013 is over, but that doesn’t mean we can’t savor the elaborate and bizarre costumes that graced the convention floor in San Diego over the weekend.

Enjoy Bryan Cranston in a Walter White mask, baby Ewok, the best Aquaman ever and many more!

END_OF_DOCUMENT_TOKEN_TO_BE_REPLACED

Comic Con is a wonderfully weird place.  It’s where nerds go to shine, to bask in all their comic book, superhero, video game glory.  It’s smelly, it’s filled with ridiculous costumes, and it’s packed wall to wall with hoards of people.  I attended for my first time this past weekend, and it was fucking awesome.

Also, it will hereby be referred to as “The Con.”

END_OF_DOCUMENT_TOKEN_TO_BE_REPLACED 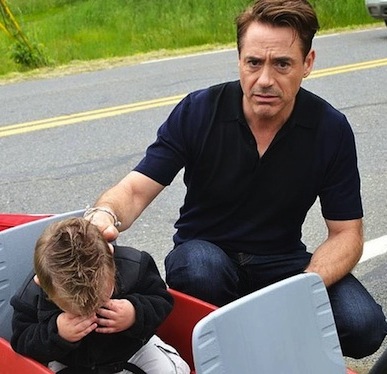 A photo of a one-and-a-half-year-old crying next to Robert Downey Jr. after his mother introduced him as Iron Man and not the regular guy that he clearly is made the rounds today.

RDJ, father of two, met the boy while walking around Massachusetts, taking a break from filming his new drama, The Judge.

The internet had a lot to say about it, with the worst, most common reaction being something about toddlers being way too young to see Iron Man (as if The Lion King isn’t more traumatizing).

Runner-up for worst goes to anyone who made fun of the kid’s name (Jaxson) and faux hawk. Here are the 5 best comments on RDJ posing next to the from around the net:

1. “Heh. Looks to me like he’s thinking: “I gave up smack for this?!” -sportzzzgirl, Gawker

2. “Maybe he wouldn’t be crying if RDJ wasn’t punching him in the head!” -Jae, People.com

3. “…Don’t even start with the Santa thing…” -AndInOtherNews, Huffington Post

4. “This expression is the face my brain would make 80% of every day if my brain had a face.”  -lumpinrazamafoo, Tumblr

5. “Young Jaxson actually is a big trip-hop fan, and he mistakenly thought his mother said they were going to see RJD2.” -Fozberry, Gawker 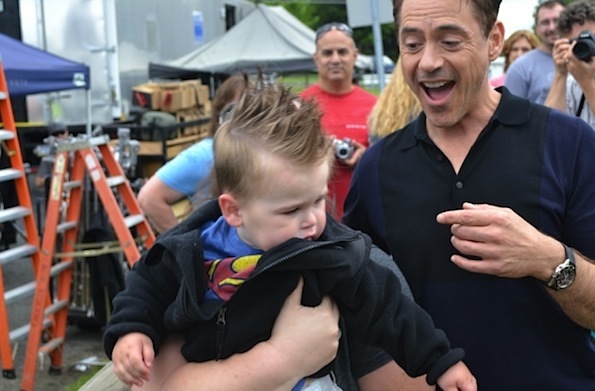 In other photos we see that the young boy is a DC Comics/Superman fan and was actually crying because he didn’t get to meet Henry Cavill or Christopher Reeve.

“That kid’s disillusionment will haunt RDJ the rest of his days. You can see him confronting his own mortality andpowerlessness right there in the picture.” -spence900, Gawker

CLICK HERE for an amazing pic of Downey as Iron Man on the Iron Throne. 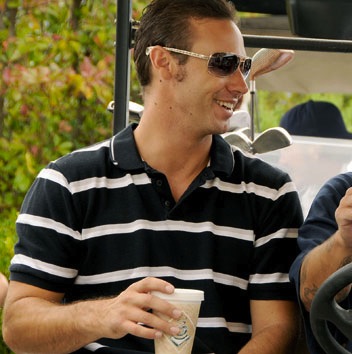 In papers filed earlier this month, Christopher Federline claims Britney stole his Capital One card out of his wallet to buy comics for her sons, one of whom Chris claims is his.

According to him, a temporary restraining order is necessary because they had sex seven years ago and she’s still terrorizing him by racking up over $4,000 in Betty Boop and Archie comics.

What an insensitive father. I mean, you’d think he wouldn’t mind her spoiling their son with G-rated reading material.  END_OF_DOCUMENT_TOKEN_TO_BE_REPLACED

Adam Carolla came under fire for an interview with the New York Post where he said that women writers and women in general are, as a rule, less funny than men.

“They make you hire a certain number of chicks, and they’re always the least funny on the writing staff. The reason why you know more funny dudes than funny chicks is that dudes are funnier than chicks.”

“If my daughter has a mediocre sense of humor, I’m just gonna tell her, ‘Be a staff writer for a sitcom. Because they’ll have to hire you, they can’t really fire you, and you don’t have to produce that much. It’ll be awesome.”

He said he wasn’t worried about reactions to his comments, that:  END_OF_DOCUMENT_TOKEN_TO_BE_REPLACED 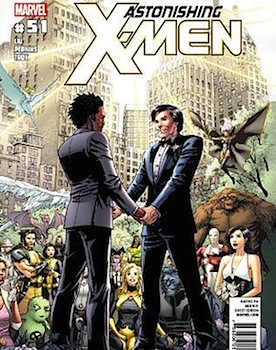 If I was a backwoods old timey conservative I’d say that ‘the gays have been infiltrating the media for years,’ and that it’s gone beyond just movies and television.

Yes, as if Queer As Folk, Will & Grace, The L Word, Brokeback Mountain, Skins, and Modern Family weren’t enough, there are homosexuals in video games (Dragon Age, Mass Effect, The Witcher 2) and comic books! Get the pitchforks.

In 1992 as a part of Alpha Flight, the Marvel superhero Northstar came out of the closet.