Active volcano Lindsay Lohan almost erupted at David Letterman last night when he veered from talk of Scary Movie 5 and Anger Management to *gasp* ask her about what’s actually going on in her life.

Lohan puffed out her lips and rolled her eyes a little less when she finally realized that she could get him to shut up by answering vaguely, without actually addressing any of her problems.

END_OF_DOCUMENT_TOKEN_TO_BE_REPLACED

“I went upstairs to greet Meryl Streep and say ‘Welcome to the show,’ and she was not in there and I looked around and found your friend, Harmony, going through her purse. True story,” Dave said, raising his hand in the testifying stance.

If Jennifer Lawrence was almost written off as an eternal bitch for cracking wise about “beating Meryl” at an awards show, then what is a fitting punishment for stealing her lipstick and compact? Castration in an Iraqi torture chamber seems fitting. (I already hated Harmony Korine.)

Fans are sharpening pitchforks and tightening nooses after Selena Gomez told David Letterman that she made Justin Bieber cry.

Gomez: Well then, that makes two of us. [Fistbump]  END_OF_DOCUMENT_TOKEN_TO_BE_REPLACED

Before you completely disregard Jennifer Lawrence as the egomaniacal monster who dissed Meryl Streep at the Golden Globes, hear her out.

On Tuesday, Lawrence told David Letterman that her intentions were never ill-meaning, and that she was simply quoting The First Wives Club when she said “I beat Meryl” after winning the Best Actress award.

“It’s never a good idea for me to wing it, but it was a quote from ‘First Wives Club’!” She told the late night host.

“I’m not on Twitter, but Twitter is very upset,” she said, mentioning that she was toying with the idea of making a public statement after Lindsay Lohan (and many others) Tweeted about it.  END_OF_DOCUMENT_TOKEN_TO_BE_REPLACED

Los Angeles band Vintage Trouble appeared on Late Show with David Letterman earlier this month for an unforgettable performance of “Blues Hand Me Down” off The Bomb Shelter Sessions. 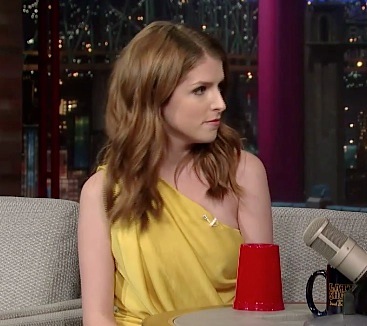 I know what you’re going to tell me after you watch the video below. “But Hallie, Anna Kendrick is just singing and tapping a cup on a table,” you’ll say in a whiney voice. And I’ll be like “Listen bitch…”

No I won’t, I won’t say any such thing, but I will tell you that I’m going off of a little more than Anna’s cup trick and performance in Pitch Perfect (which I refuse to see in the theaters, because let’s face it, I love Glee but you couldn’t pay me to see the Glee concert movie on the big screen either).

Kendrick is the most likable young actress that’s come along since Emma Stone, and I know most of you didn’t notice Emma until Easy A, which is from 2010. Up In The Air, which Anna received a Best Supporting Actress nod for, is from 2009.  END_OF_DOCUMENT_TOKEN_TO_BE_REPLACED

The “fierce five” laughed and joked with Dave, but one girl in particular stood out for her sassy comments. You guessed it – her royal unimpressed-ness, McKayla, queen of Tumblr and one liners.

On having a lot of energy at a young age she quipped “I think we’re special.”

And, when asked what age a gymnast’s skills diminish, she simply responded, “Like, 50. I think that’s the limit.”  END_OF_DOCUMENT_TOKEN_TO_BE_REPLACED 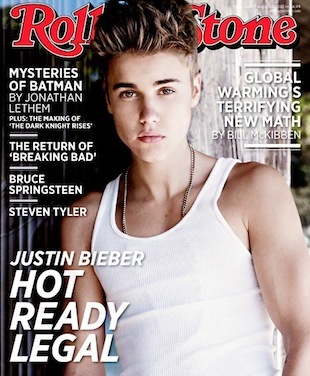 I’m not aware of any law stating that Natives in Canada get gas free-of-charge, but apparently Justin Bieber is. In a recent interview with Rolling Stone he said,

“I’m actually part Indian. I think Inuit or something? I’m enough percent that in Canada I can get free gas.”

First of all, I would ask Rolling Stone to stop indulging him and putting him on the cover in white wifebeaters, but as a long time subscriber I cannot be surprised.

Over the years, they’ve put people like The Backstreet Boys, Snooki, and the cast of Glee + The Hills on their covers.

And Bieber must deserve the limelight, since he’s such a manly man.  END_OF_DOCUMENT_TOKEN_TO_BE_REPLACED

While making the rounds for Spider-Man promotion, Emma Stone dropped by Letterman on Monday.

He showed some pictures that I’d never seen from her days at the Valley Youth Theatre.

At grade school age Emma was in no less than 16 productions at the theatre, located in Phoenix, Arizona. She told the Late Show host:

“You’ll notice that in most of the photos, it just consists of me going [makes surprised face].”

And those surprised faces are melting the frosty fossilized onyx that resides in my chest.

There are more images floating around the net, her as Eeyore, and old lady, and others that are sure to make you find Ms. Garfield even more adorable than you already did.  END_OF_DOCUMENT_TOKEN_TO_BE_REPLACED

Richard Simmons, who has a long-standing relationship with David Letterman, criticized the late night talk show host to Men’s Health, calling him “complicated” and “standoffish.”

Simmons divulged that Letterman told him that he would never meet his wife or see his son and that she was shooed off and on stage faster than you can say “Sweatin’ To The Oldies.”

Simmons: I love David. He’s more complicated than any of them, that David. I’ve done his show so many times. You know, I’ve actually never met him?…Even when I would do a remote with him, we’d go in separate cars and he wouldn’t talk to me.

END_OF_DOCUMENT_TOKEN_TO_BE_REPLACED

The Die Antwoord (translation: “the answer”) music video for “I Fink U Freeky” dropped January 31. It is the song most recognizably tied to the South African trio’s second album, Ten$Ion. The band was also featured in a spread within the latest Rolling Stone plus appeared on Letterman day before yesterday.

They are the most eccentric and eerie band that I’ve ever seen on mainstream television. Their co-singer is a little girl called Yo-Landi Vi$$e (who’s actually 35) with a high-pitched voice, black contacts and contrasting white-blonde Robynesque hair.

END_OF_DOCUMENT_TOKEN_TO_BE_REPLACED

David Letterman and Paul Schafer are among the few supporters of Ms. Lana Del Rey, whose SNL performance was panned and album received two stars from Rolling Stone and was plainly called “really bad” by Stereogum.

She visited The Late Show on Thursday, February 2nd and sang a less pitchydawg version of “Video Games,” the kind that originally earned her positive attention before her nervous Saturday Night Live disaster.

Letterman and Shafer both complimented her, saying “Wow that was beautiful,” “Great to meet you” and other repetitive forms of praise. Maybe they went a little overboard, but it was only to make up for assholes like Brian Williams not to mention hoards of indie music snobs.  END_OF_DOCUMENT_TOKEN_TO_BE_REPLACED 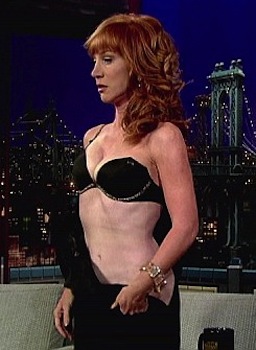 Kathy Griffin joined the likes of Drew Barrymore and Courtney Love when she stripped live on his show Friday evening. Instead of jumping on his desk and flashing him, she was dared to.

After the topic of her naked New Year’s celebration with Anderson Cooper came up, Kathy said she’d “do it right now” and Dave replied “go, go ahead.” He even helped her out of her dress, and thankfully her bra never left her body.

It’s very confusing when a self-proclaimed d-list comedian begins to constantly strip and show off her new body on television.

Female nudity is not funny, unless of course it’s a fat chick.