Original queen of the gas station turned 31 today. No exact word on how she’s celebrating or what undeserving fiancé Jason Trawick gave her as a gift.

She did tweet a photo of latest addition to the Spears family, Hannah the dog, standing on a birthday card and later thanked her fans and wrote that she was having an “absolutely wonderful birthday.”

I’m going to encourage you to check out a certain lesser-known landmark moment in her career… The Christmas song “My Only Wish (This Year).” Released in 2000, the song is predictably about how Britney wants a man under the mistletoe and in her sleigh.  END_OF_DOCUMENT_TOKEN_TO_BE_REPLACED

Rihanna covers GQ magazine’s Men of the Year issue covered in nothing, unless you count that half of a bomber jacket draped over her shoulders.

Baby giraffe is sporting her now-gone pixie cut and the grandma-dedicated underboob tattoo she got back in September. 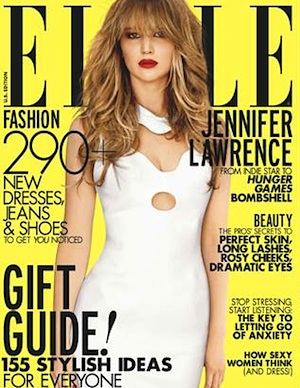 Unless Lawrence is harboring some deep secret, like dead kids or baby seals in her closet, I think we can all agree that she’s one of the only famous people under the age of 25 that you should call a role model, mainly for her honesty and ability to laugh off comments that would give most women crippling body image problems.

1. She doesn’t give a fuck if you think she’s too big: “I’m never going to starve myself for a part… I don’t want little girls to be like, ‘Oh, I want to look like Katniss, so I’m going to skip dinner. That’s something I was really conscious of during training, when you’re trying to get your body to look exactly right. I was trying to get my body to look fit and strong – not thin and underfed.”