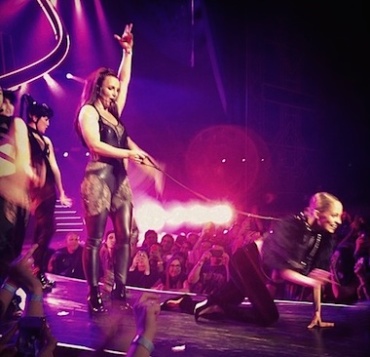 Two of my great guilty pleasure loves are Britney Spears and also The Simple Life, specifically Nicole Richie because she was kind of a looney tune, but a conscious looney tune who didn’t give a crap about anything but getting high and saying made-up words in a chipmunk voice.

Die-hard-fan-since-age-15 Richie recently visited The Tonight Show to talk about the she went to Vegas to see Britney and her dancers put a harness on her, brought her on stage and handed her leash to Britney, who proceeded to walk her like a dog and how it was the best moment of her life, better even than her wedding to that guy with a fedora glued to his head. 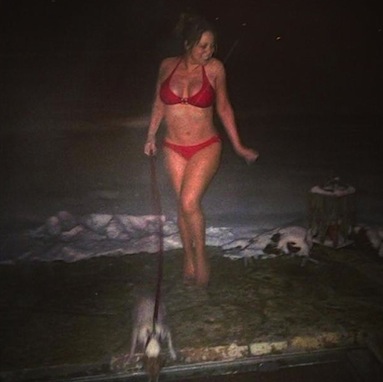 Mariah Carey is in Aspen for Christmas and is fulfilling the ancient Anglo-Saxon tradition of walking one’s dog in just a bikini during snowy, 20-degree weather.

No seriously, this is a tradition. Instagram says so. America’s Got Talent is over, but I guess Nick Cannon found some other excuse to not pose next to her in a thin red banana hammock. We all know Mariah’s second-favorite thing after Christmas is shaming her husband.

She went so far as to call herself the female version of Will Ferrell’s character in Elf on Watch What Happens Live!

“I’m him, but the girl version of the character!” the “All I Want for Christmas Is You” singer said. “I’m like a five-year-old, I’m the kid still waiting for snow.”  END_OF_DOCUMENT_TOKEN_TO_BE_REPLACED

Amanda Bynes knows this has been a slow Memorial Day news Weekend and is stepping it up for the trainwreck-loving voyeurs. Following an arrest for tossing a lovely multi chamber glass “vase” out the window and claiming a cop “slapped” her vagina, appearance-obsessed Bynes decided to attack Rihanna on Twitter.

“@Rihanna you look so ugly tryin to be white,” she wrote, and deleted. Ten minutes later, she represented Team ignoramus Breezy with a “Chris Brown beat you because you’re not pretty enough,” adding that she almost named her new dog Rihanna.

We can only assume that the cheery-chipmunk-turned-amateur-porn-star with no movies and plenty of electroshock therapy in her future is jealous of Rihanna’s past relationship with Drake.  END_OF_DOCUMENT_TOKEN_TO_BE_REPLACED

In 2011 Crystal called off her wedding to Hef because she thought all that lube would be bad for her psoriasis. Being the business man that he was, Hef stuck a “Runaway Bride Edition” on her cover story as Crystal just happened to be featured on the cover that month.

The gold digger had also admitted on the Howard Stern show that sex with Hef lasted ‘like two seconds’, adding: ‘Then I was just over it. I just like, walked away. I’m not turned on by Hef, sorry.’

What do you expect when you let an octogenarian into your vagina? That’s like saying, “I went to dinner with a Chinese guy but he was too into rice.”

END_OF_DOCUMENT_TOKEN_TO_BE_REPLACED

Demi Lovato has faithful birds tattooed all over her arm. (Celebuzz)

Shirtless UB40 singer is perfect example of why not to pierce your nipples. (TMZ)

Larry Birkhead and Anna Nicole Smith‘s daughter is a model for GUESS Kids. (Too Fab)

I desperately want to find something wrong with him, like maybe that he’s too aware of his sexiness, or that his nose is slightly large, but I’m reaching.

Tatum found out he was named the coveted Sexiest Man Alive by People Magazine (previously awarded to Bradley Cooper, Ryan Reynolds and Johnny Depp) while him and his wife were de-skunking their dog.

“My first thought was, ‘Y’all are messing with me. I told Jenna after we’d been in the bathtub washing our dogs,” he tells the mag.

Oh yeah, that’s his biggest flaw. HE’S NOT MARRIED TO YOU and your plan to meet him after spraying his canine friend didn’t work.  END_OF_DOCUMENT_TOKEN_TO_BE_REPLACED

Eagles quarterback Michael Vick deleted a photo of his daughter doing her homework from Twitter after a radio host in Philly noticed that there was a box of dog treats on the table next to her.

Vick replaced the picture with a cropped version, sans Milk-Bones, but it’s too late. I can’t erase the image from my mind.

After serving just under two years and completing his probation for his involvement in a dogfighting ring in Virginia where he reportedly killed at least eight pit bulls, Vick is legally allowed to own a dog.

If you ask me, or most anybody else, the news of Michael Vick having a dog is much more disturbing than knowing that Chris Brown and Rihanna are dating (because she’s making a choice to do so).  END_OF_DOCUMENT_TOKEN_TO_BE_REPLACED 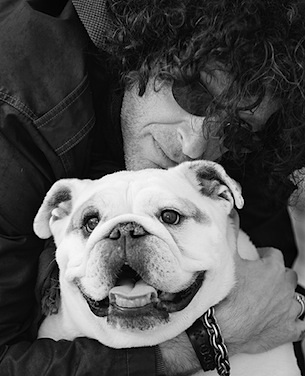 As a proud mother of two cats and one that I’m still not convinced is a feline (he may possibly be a small brown bulldog) and the former owner of two golden retrievers, I understand that losing your pets is one of the hardest things in life.

This is especially true for those of us who have chosen to not have children. Ostrosky, spokeswoman for North Shore Animal League, Tweeted, “We lost our precious Bianca today. My sweet little girl, may you rest in peace. I love you forever.”  END_OF_DOCUMENT_TOKEN_TO_BE_REPLACED 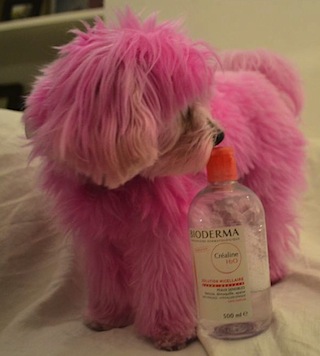 People who like to think of themselves as animal rights activists (really they donate $5 a year to the Humane Society) expressed concern over pictures of Emma Watson walking a pink Bichon Frisé in East London.

I’m with you on this one, I had no idea what a Bichon Frisé was despite my two years in dorky dog 4H. Wiki tells me that they are descended from Standard Poodles and Water Spaniels.

Canine lesson over, onto even less important things… The dog, Darcy, isn’t even hers. It belongs to America’s Next Top Model: British Invasion winner Sophie Sumner, a close friend of Watson’s. After the criticisms, Hermione wrote:

END_OF_DOCUMENT_TOKEN_TO_BE_REPLACED

The internet company Terra, which operates out of the U.S. and 16 Spanish-speaking countries, has come up with an eco-friendly if not eccentric idea – a receptacle that distributes Wi-Fi minutes in exchange for dog waste.

Ten parks in Mexico City already have special garbage cans that encourage people to clean up after their pets by calculating the weight of the items disposed thus providing everyone in range with free internet.

The more crap you collect, the more minutes you and your fellow dog walkers get. Of course, there’s nothing stopping people from just putting trash in the can. According to Creativity Online, they’ve already anticipated this.

“The agency responsible for the program notes that while people may abuse the bins by tossing trash into them for WiFi, any action to keep the streets clean is a positive one.” END_OF_DOCUMENT_TOKEN_TO_BE_REPLACED

And when I say she’s an animal I don’t mean like, a Ke$ha Animal, not like a simple party girl, which she is, but literally an animal in a cage.

The semi-infamous daughter of now divorced Hulk and Linda Hogan, posed nude in a dog cage to benefit PETA, at the Cafeina gallery in the Wynwood Art District of Miami, Florida.