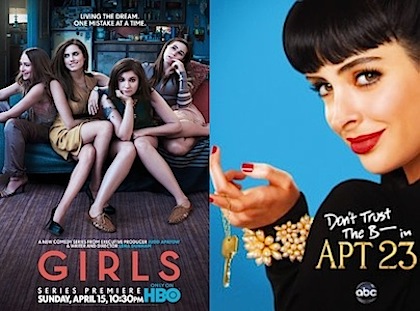 American Dad producer Nahnatchka Khan and Tiny Furniture writer/director Lena Dunham are the driving female forces behind two of the best new comedies of the past five years, ABC’s Don’t Trust The B—- In Apartment 23 and HBO’s Girls.

Don’t Trust The Bitch In Apt 23 stars Krysten Ritter and James Van Der Beek like you’ve never seen them. Ritter you may know as the drug-addicted girlfriend of Breaking Bad‘s Jesse Pinkman on. The role is more similar to the one she played in She’s Out Of My League, only twenty times more sarcastic and over the top.  END_OF_DOCUMENT_TOKEN_TO_BE_REPLACED