You may have heard about Emma Watson’s extremely insightful and empowering speech to the U.N., which was about equality and feminism being one and the same.

You ALSO may have heard that a bunch of trolls threatened to leak naked pictures of Watson to somehow make her seem like less of a feminist.

The people behind the countdown to Watson’s nude leak were actually a marketing group hired to shut down 4Chan and end the constant invasion of privacy from the hackers behind the Jennifer Lawrence scandal.  END_OF_DOCUMENT_TOKEN_TO_BE_REPLACED 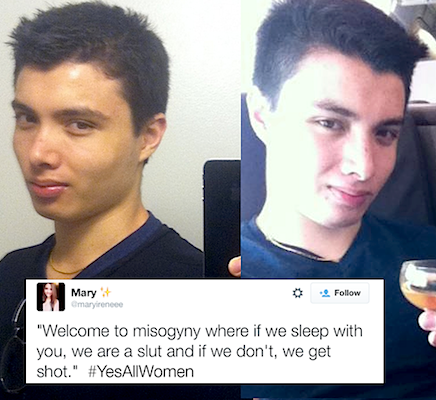 “YesAllWomen” is trending at the moment because of Elliot Rodger – who fatally stabbed his three roommates and shot three more in the streets of Isla Vista – and I wanted to take a moment to say what I find unsettling about it without sounding completely anti-feminist.

Rodger blamed women for everything, and justified his crimes because of the way they treated him. Already rich and shallow (he was openly obsessed with his Gucci sunglasses and expensive car), he felt entitled to more. He wanted admiration and attention in the form of sex.

In a world where so many women with low self-worth throw their bodies at men in a misguided attempt to feel better about themselves, we forget that men sleep around for the same fundamental reason women do.  END_OF_DOCUMENT_TOKEN_TO_BE_REPLACED