While it was weird that he hunched over after one light hit prior to the knockout and just plain stupid how much he seemed to underestimate and not respect his opponent, his eyes did “just roll back into his head,” as Dana White put it. Seems like a hard thing to fake. Maybe?  END_OF_DOCUMENT_TOKEN_TO_BE_REPLACED 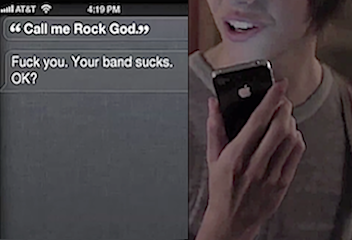 In a new video, New York film student Matt Binder decided to channel his hatred for the Apple iPhone 4S commercial with the jerky teenage slavemaster who demands to be addressed as “rock god.”

The fixed version of the video features an unbridled Siri telling him to get a haircut, suggesting that Baha Men are suited to his tastes and saying, “Fuck you. Your band sucks. OK?”

I reached out to Binder for more info and he told me, “As a fan of Apple products, it was shocking to see such a commercial come from them. The kid is trying to learn guitar in the beginning of the commercial, plays to a few friends in a garage, and asks to be called ‘Rock God’ in all of 30 seconds.”

END_OF_DOCUMENT_TOKEN_TO_BE_REPLACED

Janice Dickinson made a bold statement during an interview with FilmOn’s Alki David, which was released on Monday. She says America’s Next Top Model, for which she served on as a judge for four seasons, is completely rigged by Cover Girl, the company the winner scores a contract with.

“There’s back history of experience and the way she treated me when I worked for her on the panel, and there was a way I experienced being on that show, being conned, thinking that I was actually helping judge a TV franchise, END_OF_DOCUMENT_TOKEN_TO_BE_REPLACED